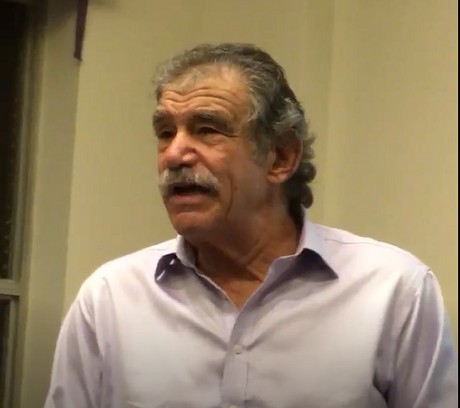 Most high-flying startups quickly go down in flames because they follow business plans that have little or no relevance to their customers’ needs, according to lean startup expert Bob Dorf.

In a presentation on October 20 at Fairleigh Dickinson University in Madison, Dorf described how young companies can successfully tiptoe through a minefield of obstacles. The presentation was based on his book, “The Startup Owner’s Manual: The Step-By-Step Guide for Building a Great Company.”

Dorf’s talk was part of the Morris Tech Meetup’s ongoing presentation series, and was hosted by Fairleigh Dickinson’s Silberman College of Business and Rothman Institute of Innovation & Entrepreneurship.

An entrepreneur, educator, investor and bestselling author, Dorf was entertaining and informative as he spoke about creating and maintaining a successful company. He provided colorful and often humorous insights into misguided entrepreneurs who had somehow forgotten or ignored the principle that “the only opinion that matters is the customer’s.”

It’s the lack of customers, not of capital or other resources, that is cited as the chief reason why only a fraction of the hundreds of thousands of startups survive beyond their formative years, Dorf said.

One of the biggest mistakes that many startup founders make is creating voluminous business plans that are more fiction than fact, based on assumptions made by the startups, rather than on input from prospective customers.

But startups can’t be judged too harshly for creating business plans that are initially designed for large, established companies. Dorf explained that the practice of writing these plans began at the turn of the 20th century, when business schools taught that this was the way to build a large company.

This same approach was later “applied for decades to startups,” which is the surest way to sink a fledging enterprise, according to Dorf.

The reason why startups should avoid business plans is that they’re only useful for companies with an established track record, or for companies that have many customers.  Startups usually have few, if any, customers. So, they must seek out prospective customers for face-to-face conversations to learn whether there’s a need for company’s product or service. In other words, “you let the customer drive the bus,” Dorf explained.

When starting a business, entrepreneurs must remember that their company has to offer a product or service that is repeatable, scalable and, of course, eventually profitable. But the first two components should be used to measure the company’s progress, not profitability, during the company’s early startup phase.

Dorf outlined a plan that was much simpler, but covered all the bases that startups must cover to become successful.

He noted that a startup — or any company, for that matter — must have a clear value proposition in the marketplace. The reason is that customers will likely avoid buying from a company that doesn’t show the value of its product or service, differentiate itself from its competitors or create something that no one else has.

Another important element of the startup plan, according to Dorf, is the “product/market fit,” a term coined by noted entrepreneur Marc Andreessen. This means that startups need to find early adopters, get their feedback and gauge their interest, in order to have any chance of becoming successful.

“To get it right, you have to have a product/market fit. This will give you a predictable close rate,” said Dorf. “This is the first cinder block in building the foundation of a great business.”

Customer feedback is critical during the startup’s early days because it helps address key issues that companies face, answering such questions as: is the product solving a serious problem in the marketplace or does anyone care about it?

In addition, the customers’ comments will also shed light on whether the product or service is significantly different from, or newer than, anything else on the market. “If you can’t answer that question, then you’re just another contestant in a beauty queen contest,” Dorf said.

He strongly advised that startups avoid getting feedback from friends and relatives at all costs, as they will undoubtedly refrain from giving their honest opinions. Dorf calls this the “ugly baby rule,” which means that family and friends will always find something positive to say about an unattractive infant.

The ability to forge strong customer relationships is also essential to a startup’s survival. Failure to meet this requirement is “singlehandedly responsible for most startup deaths,” Dorf noted.