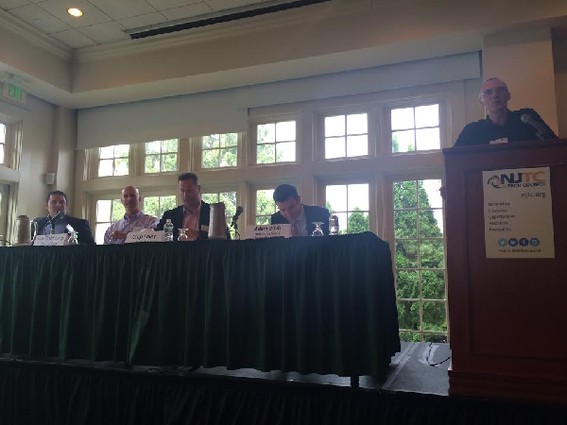 At its Annual Meeting, held on July 15, the New Jersey Tech Council brought together a panel of heavy hitters in sports technology for a discussion mainly fueled by audience questions.

In their introductions, the panelists talked about their roles in the tech industry. Davis said that when he first walked into the Prudential Center, it was all about a hockey team that owned a building. Now it’s about a building that houses as a hockey team. The building and the tech in the building are that important, he implied.

Foley noted that he works for High Point Solutions at the Barclays Center, the home of the Nets, which were lured from New Jersey to Brooklyn. Actually he said, it was all part of a real estate play. “The project took roughly 10 years. I was involved the whole time. My scope was all the IT, all the technology, all the audiovisuals, including the big score boards, the LEDs and the broadcast technology … and how we get the signal outside the building” to the networks.

Goldberg said that iSport360 is on a crusade “to help youth sports and build a technology platform for coaches and parents that introduces objective standards.” The problem, he said, is that the sidelines at any youth sports game is chaotic. It’s a pressure cooker for the kids. One in a thousand kids gets a sports scholarship to college, but one in two parents thinks that his or her kid is going to get a scholarship. Objective standards don’t exist in youth sports, but Goldberg is bent on developing them and introducing assessment tools into the games.

Nisi, who noted he was born and raised in New Jersey, said that he had the pleasure of running the technology side for Microsoft Services for this region of the country, which includes some sports-heavy clients. And he noted that his group has served as the field office for the “Surface on the Sidelines” program. “We take the hardest challenges customers can throw at us and solve the problems on the technology side, software side. We build applications that coaches from 27 years old to 77 years old can handle, as well as infrastructure and solutions.”

Some takeaways from the event:

On where technology is headed to prevent concussions:

·       There is a big emphasis on the training of coaches  now, including teaching coaches what’s appropriate. For example, kids under 12 shouldn’t be doing headers in soccer.

·       There are a lot of wearable companies that are developing technology to teach soccer players how to head the ball properly.

·       In the NFL, player safety is first and foremost, but there’s no getting around the fact that players are bigger, stronger and faster than they used to be, and collisions will occur. It’s about making sure you have the best technology out there to protect the players.

·       The NFL’s medical records and concussion software have been updated. “You’ll see doctors running out onto the field [with their Surface tablets], with cutting-edge concussion test software on them.” They can run standard concussion tests right there. Sensors and pads in helmets can measure the force of the hit. “Helmets are unbelievably sophisticated,” and no one touches them except the player or other authorized people. They can’t have any weak parts.

·       The panel mostly agreed that this will get worse before it gets better.

·       In sports, everyone wants an edge, and that fuels this kind of behavior.

·       One of the reasons teams are vulnerable is that cybersecurity hasn’t been on the agenda until recently.

·       For example, “each team in the NFL is a privately owned company, with its own IT staff requirements.” It’s a matter of who has the budget for cybersecurity, and there are gaps between the teams.

On the use of big data and data analytics:

·       Two years ago, the Devils were the first hockey team to hire a data analyst.

·       The NBA did a deal with an analytics company to install cameras in their facilities and give players feedback. It’s a tremendous benefit to know where players are on the court at any given time, and where they are going.

·       Some of the coaches don’t use the technology because they are so “old school.”

·       Teams have been looking into putting a chip inside the ball that would have sensors, in this case for velocity and distance.

·       It wouldn’t be too hard to have something that would detect inflation levels.

·       However, so far the chips are too big. “They could not get within the .02 gram variance that these balls are allowed.”

·       In basketball, some consumer balls are Bluetooth-enabled, so that players can track their shots and dribbles.

·       Technology in officiating is progressing quickly.

·       In the NHL, they really need the technology because the puck moves so fast.

·       The NHL sends a signal to Toronto, and it takes 60 seconds or less for them to have a verdict on whether or not a puck crossed a line.

·       The NFL has a great system for making judgement calls, but it is working on ways to use that system without slowing down the game or changing the fan experience. They have to be able to keep the fans in the moment by making the calls on the field.

On the use of technologies like Meerkat and Periscope:

·       Goldman can envision the use of these technologies in youth sports. “It would be sensational for a coach to be able to live stream a practice to parents,” to share what the coach is seeing (for example, that a kid needs to work on passing skills).

·       Also, it could be used so that grandparents who are home at a computer or who live far away could see a game.

·       On the professional level, there are major rights issues involved. At Barclays Center, they will begin blocking Periscope so that people can’t live stream the games.

·       Some of the stadiums don’t have the latest in connectivity, so streaming the games isn’t an issue.