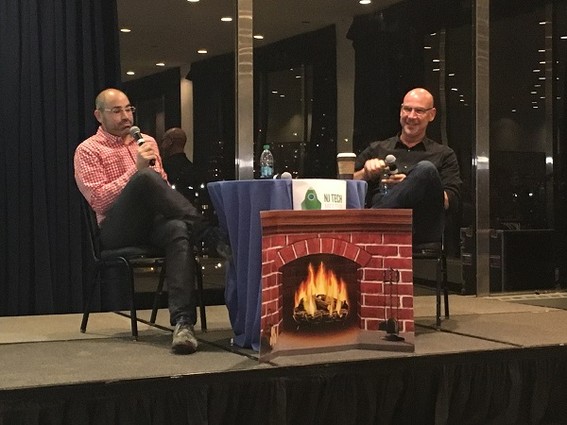 In the first 15 minutes of his “fireside chat” with Aaron Price, at the NJ Tech Meetup on Feb. 16, PivotDesk (Boulder) cofounder and TechStars mentor David Mandell gave an abundance of valuable advice to the startup entrepreneurs in the audience.

His very first remarks focused on the emotional connection that a founder must make with his prospective investors.

Bluntly, Mandell said, “It’s really important to remember that nobody gives a [expletive deleted] about what you do.” Until you embrace that fact, “you won’t be really good at pitching your business.”

Too many companies start their pitches by telling you what they do, and it’s not very interesting, he said.

You have to get that emotional connection and make people care first, Mandell noted. And to do that, you have to make them care about the pain point you’re solving.

Asked what the presenters at the meetup that night could have done more effectively, Mandell answered, “None of them came across as really passionate about what they do. And I think that’s an important thing because you want to make that emotional connection with your audience, which I think is really critical, but especially if you are looking for investment.”

Investors look for people who will do anything they can to make their business work, he noted. “So, for example, if I’m sitting here, and the place that I need to get to is four buildings away, investors want someone who is going  to run through every … wall between here and there to get that done.”

And that passion has to be communicated when you pitch your business because that’s the easiest way to make that connection with investors, he said.

Another mistake is that presenters close their pitches weakly. “The close of your pitch is the second most important part of your entire pitch. Once you open and get people interested,  and you tell them what’s going on … close strong.”

People are going to remember a couple of things that you said, so don’t close with “thanks for listening to me tonight,” or “we’re raising money, come find me and my partner” at the back of the room, he stated.

Close with why it matters. “Leave it big because that’s the last chance you have to leave an impression.”

In response to a question from Price about finding the right customer base for a company, Mandell said “You have to figure out who your audience is and how to best connect with them, because if you don’t your business will fail.” It’s a lot of iteration and work.

He noted that when he mentors at TechStars, and a company there tells him that their product is for everyone, he tells them, “You’re dead, because if you cannot truly describe your target audience as specifically as you possibly can, you will lose because you don’t have enough time, money and resources to reach everybody.”

Startups need to know exactly whom to go after, so they can figure out that target market’s pain points. “You want to know how to connect with them emotionally, you want to know exactly how to talk about their life, and how you are going to make their life better, faster, quicker, easier … to be able to communicate the value prop,” he told the group.

Mandell added that choosing which market segment or business to pursue is really hard because startups never want to say “no” to a potential customer. “But the truth is you will get many more customers faster  if you focus than if you try to make everybody happy.”

To know which market to go after, just pick one, get the data and if it’s not working out, shift. Figure out your priorities for the next three months; the major milestones you’ll have to accomplish for the business; and how to focus your time, money and resources to get there. Until you realize your priorities are wrong, that is. “But until I know they are wrong, I’m convinced they are right … until I hit that wall.”

So make a choice, he advised. “Whether it’s your target market or your technology focus or your partnership strategy, whatever it is, make a choice, get everyone in the company focused on it, go as far as you can go in that direction until you realize it’s the wrong direction.”

Mandell’s current startup, PivotDesk, is a company that matches small companies that can’t commit to a long-term lease with large companies that have extra office space because they had taken more space than they needed, assuming they’d grow into it.

The platform is focused mostly on company culture “because when you are sharing your space, your culture is much more important than the actual address.” Once a company finds the right match, PivotDesk handles the details. “So, nobody has to be a landlord; nobody has to be a tenant.” Both sides can be in this sharing relationship as long as they need to be in it.

Since the startup isn’t tied to a traditional lease, the founder isn’t stressed out about long-term commitments. Founders don’t have to deal with making personal guarantees, for example, or with having to move the company every year because the lease isn’t working out.

Traditional real estate, he added, is focused on one thing: monetizing their infrastructure, not helping you grow your business.

The video of Mandell’s complete talk can be found here.

Previous: Former Princeton Company IntegriChain Gets Investment from Accel-KKR: Buys Out All Outside Investors
Next: 3D-Printed Braille Maps Can Help the Blind Navigate Better