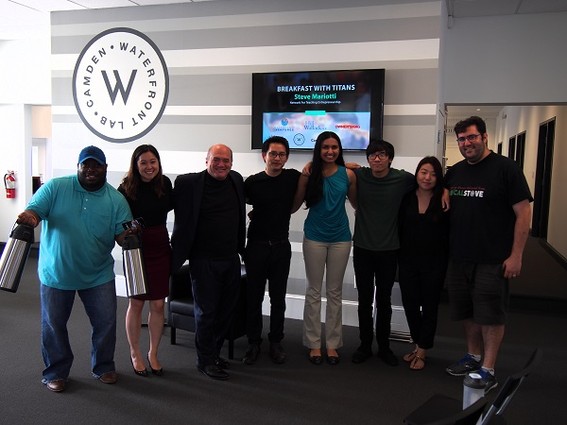 The event focused on Camden and cities like it as places of interest for growing startups that can provide economic opportunities to struggling communities.

Mariotti has 38 years of experience in teaching entrepreneurship to troubled and impoverished youth. He authored and coauthored a collection of 38 books on young entrepreneurship. The organization he founded, Network for Teaching Entrepreneurship (New York), has given its 80-hour course on starting a small business to over 800,000 young people from low-income areas.

The speaker attributed much of his own entrepreneurial success to the Camden area. He told the audience that, on the drive into the city, he “remembered being here in 1981.” What brought Mariotti into Camden all those years ago, and what attracted many of the audience members to the speaker series, was a shared interest in advancing the technologies and methodologies for educating troubled or impoverished youth.

Mariotti believes that, while troubled and impoverished kids may not take interest in traditional curricula, they can be taught that “every other human being is a potential market.”

Even when Mariotti was in the classroom, he was teaching kids how to start a business. His curriculum “helped children break poverty; learn math, reading, writing, critical thinking, long-term planning; and underneath it … how to make a profit.” In the eyes of Mariotti, giving these children the resources to become entrepreneurs and improve their communities is the answer.

For many entrepreneurs, being part of tech startups in new and growing fields goes hand-in-hand with a desire to improve communities that need help. Mariotti, who was living in New York during his transformative trip to Camden, expanded this desire into an organization that helps low-income communities around the globe.

Before turning the discussion over to the audience, Mariotti closed by talking about the struggles that 24 million U.S. startups face, such as the problems of running a sole proprietorship, competition, lack of capital and tough neighborhoods. He emphasized the importance for entrepreneurs of looking for every opportunity to grow and the necessity of utilizing available resources like networking.

“Breakfast with Titans” takes place once a month with the purpose of introducing entrepreneurs and young startups to experienced entrepreneurs in a specific field. The goal of the series is to get entrepreneurs, tech and non-tech, excited about the city of Camden.

One of the many benefits of events such as “Breakfast with Titans” is the availability of networking connections to attending entrepreneurs. In the case of the August 2 event, attendees gained inspiration from a leading social and tech entrepreneur, and had the opportunity to network with other entrepreneurs who have similar visions for the Camden area.

Waterfront Ventures is also attempting to lure entrepreneurs to Camden through its Camden Catalyst pitch competition on September 16, which will award $25,000 to the best startup pitch that promises to bring growth and jobs to Camden.