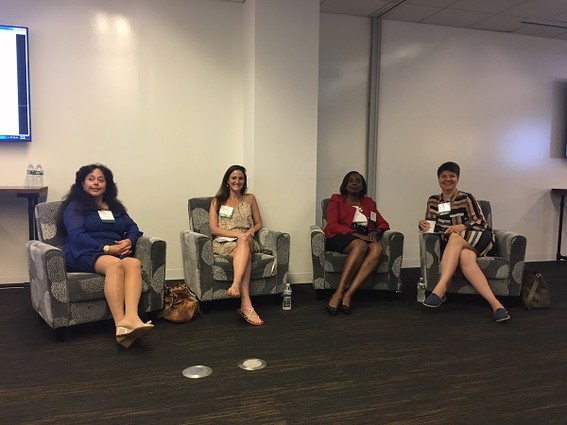 Panelists for the Women in Tech forum at Vonage in early August. | Esther Surden

Men are essential to the success of women-in-tech movements as mentors, supporters and as guardians of company cultures said  panelists at the New Jersey Tech Council’s Women in Tech Forum, held on August 2 at the headquarters of Vonage, in Holmdel.

The standing-room-only event highlighted the role of men in women-in-tech initiatives, and there was an exciting conversation that revealed diverse perspectives among the panel and audience.

The morning kicked off with a networking breakfast sponsored by Vonage in a room packed with men and women who were at various points in their careers. The crowd was welcomed by Laura Colon, regional director at Vonage.

Since the New Jersey Tech Council began its Women in Tech program, there has been discussion about how men should be included in this initiative, St. Elien told the crowd. Some of the questions that came up were, “Should men be included in panels for their points of view?,” “Should they be encouraged to attend these events?” and “Should events remain ‘by women and for women’?”

Most panelists said that they appreciated men’s points of view, wanted to involve them in solving the cultural problems that crop up in tech workplaces, and appreciated the men who attended the event. Men in the audience talked about what they do on a day-to-day basis to level the playing field for their women counterparts.

Several panelists agreed that mentorship was essential for individuals who are progressing in their corporate careers. Here is some of what they said:

Discussing how women in tech roles handle subtle sexism in the workplace, panelists and audience members agreed that times are changing in some organizations.

The panel agreed that men should be involved in the initiative, so that they can help women-in-tech movements progress.

Zundl shared some valuable insights from her own research on women in tech industries, including statistics that she had gathered and accounts that other women had given her about their own experiences.

[The New Jersey Tech Council is holding a Women in Tech Conference, to be hosted at NJIT, in Newark on Oct. 11.]

Previous: 10 Questions for Justin Insalaco, CEO of Asbury Park Startup Legemdary
Next: Interview: Cathy C. Smith Discusses Her Book “How to Become a Digital Leader: A Roadmap to Success”