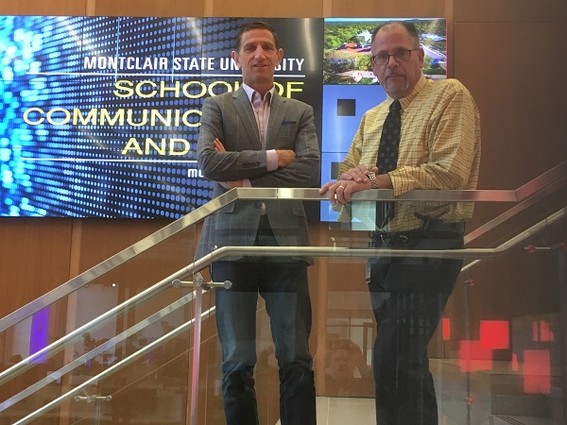 Like those renowned Big Apple companies, MSU officials say that the school is making a name for itself in creating “the most technologically advanced media and production facility” of any U.S. higher education institution.

The 105,000-square-foot, $55.8 million-dollar facility, which opened its doors in late September, was built to prepare its students to work in an industry that’s now undergoing a seismic transformation and will continue to do so in the foreseeable future.

The new building presents “an opportunity for Montclair State University to be one of the leaders in the nation in communication and media,” said Keith Strudler, the school’s director.

Since its opening, the school has hosted a few notable media events, including the New Jersey lieutenant gubernatorial debate and Supreme Court Associate Justice Ruth Bader Ginsburg discussing scenes in a Shakespeare play during a roundtable debate.

Entering the school, visitors immediately see students and faculty interacting with each other in numerous open areas.  Near the building’s front entrance is one of the school’s main attractions: a spacious room known as the “News Lab,” where students and their instructors can be found producing broadcast news segments or engaging in other news-gathering activities.

One of the school’s highlights is a 4K broadcast production studio and control room, the first one in the nation to be located on a university campus. The broadcasts produced by this facility are clearer and more detailed than full high-definition television broadcasts.

Nicholas Tzanis, the school’s director of broadcast and media operations, said that the school built the 4K studio to provide students with the broadcast technology of the future. “The reason we offer 4K is because of consumer trends. Netflix and Amazon are already giving us 4K content, and it’s a matter of time before the networks start offering 4K content.  We looked at the crystal ball and decided to build the [4K] facility.  In five years from now, we will still have a viable program.”

Tzanis, who spent more than two decades working in various positions at NBC, CNBC and MSNBC, said that the school’s technology and collaborative teaching methods are needed to fully provide its students with the skills needed for handling the multiple tasks required of today’s professional communicators.

“If you look at the current landscape of what is going on in this industry, you’re no longer just a camera operator or an editor. There is an expectation that you can produce, write, edit and shoot your own package,” Tzanis said. “They have to be like a Swiss army knife because the industry calls for it.”

The school’s state-of-the-art technology is the result of a long-term strategic alliance between the university and Sony Electronics. John Garmendi, national account manager at Sony Professional Solutions of America (Park Ridge), said that the alliance between Sony and the university underscores Sony’s commitment to higher education.

“The relationship between the two organizations dates back nearly a decade, to the school’s first uses of Sony high-definition professional equipment. There is growing demand for 4K content and for future professionals trained in the latest production technologies. This trend, combined with Montclair State’s creative and active learning approach to education, laid the foundation for building this unique facility and industry resource,” Garmendi said.

The university’s radio station, WMSU-FM, the student newspaper, The Montclarion, and some communication and media departments, all of which were scattered around the campus, are now housed in the new facility to help spur greater collaboration among students studying communications, journalism, broadcast and digital media, public relations and related fields. The growing convergence of these fields played an important role in the creation of the school and in the development of the curriculum, which will prepare students for the rapid changes occurring in this business.

“We had these different departments across campus that did stuff in various communication and media fields. The goal of building a new school was to bring them all together,” Strudler said. “Our students will leave here with malleable and multifaceted skill sets working in a converged space.”

Besides training students to become tomorrow’s communication and media professionals, the school offers an alternative location for filmmakers, public relations and advertising agencies, and others in similar industries to produce their projects.  “We’re open for business,” Strudler said.

School officials also say that their students have a great opportunity to work with industry professionals to gain valuable experience prior to graduation—and, perhaps, a job.

The school is also attracting a lot of attention from students seeking to continue their education.

“Prospective students and their parents who come here are duly impressed,” Strudler noted. “We are going to quickly become a first-choice school in places where they had not ever thought of us before.  The goal is to increasingly offer the opportunity to qualified students, bringing the best and brightest kids here, and let them create.”