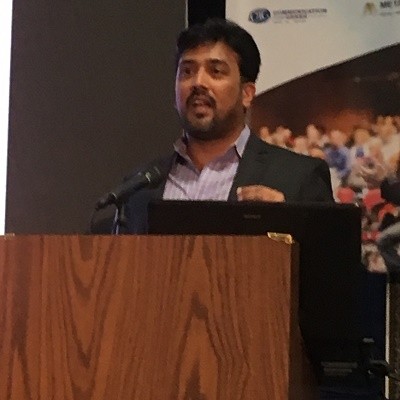 The internet of things (IoT) is creating new ways for people work and live, but this technology will present unprecedented challenges in the years ahead, in terms of how to use it successfully, said one expert during the first IT Connect conference, held at the Garden State Exhibit Center, in Somerset. More than 60 companies participated in the two-day event, on September 9-10.

On the first day of the conference, Michele Siekerka, president and CEO of the New Jersey Business & Industry Association, kicked off the event with a presentation on the “innovation explosion” across the state.

Siekerka told the audience that coalitions of businesses, government and academia are working to help redress the shortage of highly skilled technology workers, in order to “ensure that we are building out an innovation ecosystem.”

Siekerka cited instances of coalitions actively collaborating on high-tech projects, such as NJIT and Panasonic, which are working together on facial recognition technology.

To fulfill the state’s future need for tech workers, New Jersey’s schools must start providing training in these skills as early as kindergarten. “There needs to be a change on how we train people for these jobs,” said Siekerka. “We need to begin the educational lifestyle at K-12.”

One of the featured speakers, Rama Balasubramanian, cofounder of the tech company Collaborate Humans and Things (Plainsboro), told the audience that the IoT is becoming an integral part of our daily lives, as businesses and communities increasingly use this technology to bring more connectivity to their devices. With the IoT, “smart” cities can improve the quality of their residents’ lives — for instance, by making high-crime neighborhoods safer or enabling businesses to run more efficiently and profitably.

Balasubramanian predicted that the IoT will be as ubiquitous as smart phones, as the cost of smart-connected devices drops and this technology becomes more mainstream. “In the future, every device worth $100 or more will be a smart device.”

This IoT revolution is expected to have a huge economic impact in the not-so-distant future. According to the research firm Gartner (Stamford, Conn.), the IoT is expected to reach $2 trillion in global economic value by 2020, and up to 75 billion smart-connected devices will be “talking” to each other by then.

One IoT vertical, the wearables market, is expected to grow to more than $53 billion globally by 2019, while another vertical, home-automation systems, is estimated to reach $60 billion at about the same time.

Balasubramanian gave many examples of the IoT’s impact on society. For instance, it will enable communities to use cameras at traffic lights to transmit data on traffic volumes. This will allow the lights to be automatically adjusted to match traffic levels, eliminating the wait for long red lights at empty intersections.

The IoT is also making it easier for consumers to handle daily tasks like grocery shopping. Amazon has taken this activity to the next level with its Amazon Dash Button, a small Wi-Fi connected device with a product name emblazoned on it. Users just push the button on the device to order laundry detergent or any other household product from Amazon’s online grocery delivery service.

The technology can also be used to place beacons into clothes that will allow people to find them quickly with their smart phones.

Regarding the healthcare sector, Balasubramanian said that the IoT can help ensure that people discharged from hospitals or outpatient medical facilities are regularly taking their prescription medications. This is accomplished with smart devices placed in medicine containers that alert healthcare providers if the patient is not taking his or her medication as prescribed.

While the IoT is being touted as a game changer, there are growing concerns that this technological innovation will eliminate some jobs. Balasubramanian said that the IoT could eliminate jobs that tend to be mundane and repetitive, such as stocking store shelves. But this will enable human workers handling these tasks to be retrained for more important or complicated work.

Balasubramanian said that more companies will be using this technology because it’s viewed as “a way to solve immediate tactical problems and as a tool for longer-term business strategies.”

One of the biggest challenges facing the widespread adoption of the IoT is security, he said. For example, without installing the proper security safeguards in IoT devices, there is a good chance that hackers could wreak havoc in a home, business or governmental agency. “I can’t stress enough how important data security is for IoT.”

Previous: Now you can text emergencies to 911 from anywhere in N.J.
Next: NJ TECH CORNER: Cognizant Technology Solutions Corp.