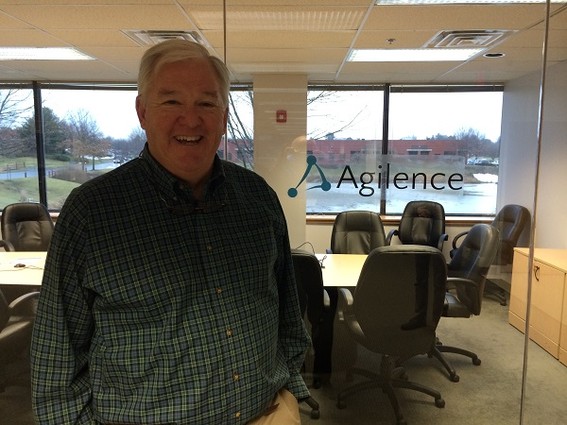 When Russ Hawkins joined Agilence as its CEO in November 2007, he thought he had his hands full with building a tech startup that had been founded only a year earlier.

Hawkins ran his hand through his thick gray hair as he recalled those days, when the U.S. and other countries around the globe were reeling from the most severe economic chaos since the Great Depression. Back then, Agilence was still selling its original product: video data for loss prevention in the retail industry.

The Mount Laurel-based company’s growth was stunted by the global recession. Although Agilence posted decent growth for a startup — from $700,000 in revenues in 2007 to $3 million in 2009 — it still wasn’t good enough for Hawkins. “Business was not going as fast as we wanted to go.”

That’s because some of Agilence’s customers, like most businesses, were hurting from the recession and didn’t have the money to buy new technology. In addition,  retailers “didn’t want to put more stuff in the store,” Hawkins said.

Nowadays, Agilence wants to be known as a provider of data analytics solutions for retail, food and beverage companies. The company feels that this description more accurately reflects its current business, and better positions it for strong demand from retailers who are increasingly embracing data analytics to help improve their operations, build more customer engagement and fatten their profit margins.

With a fresh cash infusion of $6 million from investors in December, Hawkins and his team have lately been emphasizing the company’s transition from its initial role to that of a provider of data analytics for operational improvements, promotional analysis and other data-enriched functions in the retail sector.

The new round of financing, led by Arrowroot Capital (Santa Monica, Calif.), is expected to hasten Agilence’s growth in the retail space while allowing it to expand in other areas, such as grocery stores and restaurants. Currently, Agilence is using a “land-and-expand” strategy, which entails offering its data analytics software product to existing customers.

The platform, called “Retail 20/20 exception reporting,” allows retailers to see everything — including point-of-sale, inventory, customer loyalty, and finance — all on one screen. This enables retailers to immediately analyze and react to patterns, eliminate operational problems and minimize fraud.

Hawkins said that Agilence’s cloud-based software can “identify stuff that doesn’t make sense in the data” collected by retailers.

However, there is a huge amount of data generated by these types of transactions that will give the companies valuable information. For instance, they can see how each store is faring with the promotion, and on that basis decide what steps to take to help the lagging stores perform as well as the successful ones.

Agilence has also increased its marketing to smaller companies because they tend to be more nimble and open to technological advancements. “There is more enlightened leadership” at these companies,” Hawkins said. “Not old school.”

Hawkins envisions Agilence as playing a pivotal role in the rapidly changing retail environment, where companies need to quickly analyze and respond to data in order to maximize performance.

“We’re really creating something that doesn’t exist today,” he said.

Previous: LaunchNJ Women Entrepreneurs Get Advice from Experienced Women Founders
Next: The Most Optimistic Person You’ll Ever Meet (Four Lessons From a Career in Startups)