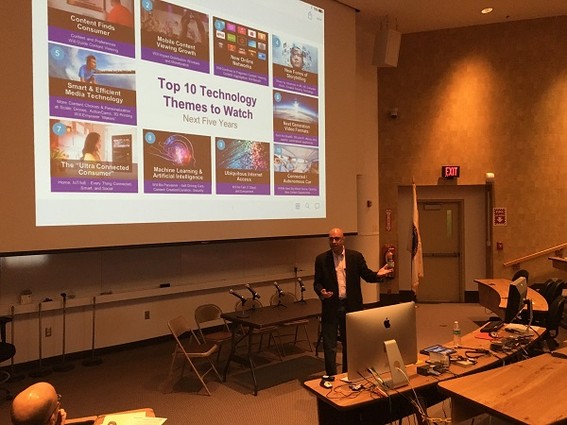 Tattoos that open hotel doors and let people pay for goods at theme parks, television studios that practically run themselves and relevant content that finds you rather than you finding it — these are only some of the ideas being incubated at NBCUniversal Media Labs, in Englewood, according to Sanjay Macwan, senior vice president and CTO.

Macwan made these remarks on Feb. 11 at the New Jersey Technology Council’s Innovation Forecast 2016 event, at the Princeton Plasma Physics Laboratory, a Department of Energy facility run by Princeton University.

The Princeton Plasma Physics Lab, an innovative organization in its own right, is trying to develop fusion energy through controlled nuclear fusion research.

He mentioned that he focuses particularly on innovation in the media and content industries. However, he said, “It’s really important to look beyond your industry and adopt innovations that come from other industries.”

As an example of how innovations can be transferred from one industry to another, Macwan talked about a startup based on university research that began by specializing in the healthcare and beauty industries. The company had developed a sticker that safely transferred a waterproof tattoo to an individual’s skin.

At Media Labs, they took that idea and further, and “incubated it” into a sticker tattoo, with wireless and electronics capability, that can be used for theme park ticketing and payment at a checkout. At a water park, for example, there will be no need to carry a wallet or separate key card, he said.

Early in his talk, Macwan pointed out many of the transformational trends that are happening in his industry, including the “ultra-connected consumer,” and “machine learning and artificial intelligence.”

Media Labs is looking at machine learning to understand how to use machines to create content. He added that one of the challenges he had for the team was to look at the way television networks are run today with large numbers of people, and figure out how to use machine learning and artificial intelligence to run them with as few as 35 people, excluding on-air talent.  “That is something we are working on aggressively,” he said.

The sophisticated studio of the future will be run with a very small staff, but have the ability to look like a massive infrastructure, via renderings of graphics and software, he added later in his presentation.

Talking about the trend towards connected and autonomous cars, Macwan predicted that by 2020 there will be cars that don’t need drivers. This has implications for the entertainment industry.

“In this area of the country, many of us have long commutes. I drive an hour and 20 minutes each way. When I’m not the driver, I’ll have almost three hours available to me. How can we as a content provider fill those three hours with an enriched content experience?” This ecosystem is emerging, and NBCUniversal is trying to exploit it with both audio and video content, he said.

Another emerging area of interest is the use of drones to shoot movie scenes in ways that were not possible before in the industry. Macwan praised GoPro for revolutionizing how average users can share content.

In consumer-facing technologies, Media Labs has been incubating a number of virtual reality ideas during the last several years, he said. “We can use this to tell stories very creatively and in an immersive way.”

He asked the audience to imagine VR content for the film Jurassic World in which viewers could actually be right next to the dinosaurs. Perhaps NBCUniversal will be able to use VR for pre-vacation experiences for folks visiting theme parks, allowing them to get a real feel for what awaits them, he said.