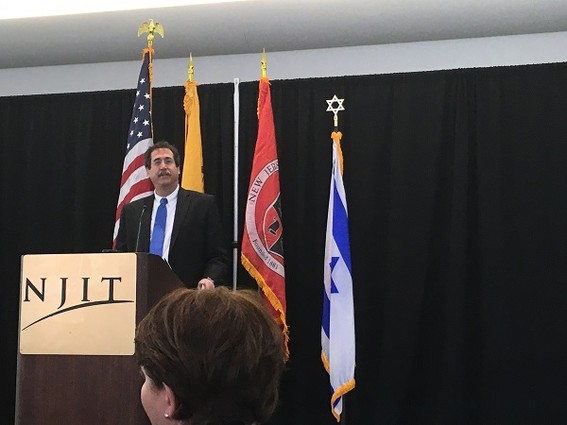 The digital divide was on the minds of attendees at the New Jersey-Israel Commission event at New Jersey Institute of Technology on December 15. Participants looked at how education and innovation can drive economic development.

The digital divide is defined as the gap between those populations and regions that have access to modern information and communications technology and those that don’t or that have only restricted access. It can also refer to a gender gap in the tech field.

Speakers and dignitaries from Israel gave their perspectives on a problem that plagues both Israel and the state of New Jersey, if not the U.S. as a whole: how to overcome poverty by using education as a means of generating higher wages and a more stable tax base.

Introducing the presenters, including Lt. Gov. Kim Guadagno, Mark Levenson, chair of the New Jersey-Israel Commission, noted that the commission was signed into law by Gov. Kean in 1988, and has been extended permanently. The commission has an education, trade and cultural mandate. “By the end of 2016, we expect the trade relationship with New Jersey to be close to $2 billion,” he said.

Dr. Dan Ben-David, of the Shoresh Institution for Socioeconomic Research and Tel Aviv University, gave the keynote address, in which he drew comparisons with New Jersey where warranted. He pointed out that high tech now makes up a substantial portion of Israel’s economy, a big change from the country’s earlier dependence on agriculture. Israel’s economic growth is good in the short run, he said. “The problem is the long run. It is unsustainable.”

Israel’s productivity is among the lowest in the developed world, “despite the fact that we are a startup nation,” he said. The problem is that Israel is two nations in one. The startup nation Israel has a phenomenal high tech sector and a medical sector second to none.

A major source of income inequality, he added, is educational inequality, which has gotten worse as Israel has moved from an agrarian economy to a skill-based one. It went from a country where everyone could find a job, no matter what his or her educational level, to one where it’s mostly educated people who are employed.

He noted that even the Haredi used to work in the agrarian Israel, but with typically only an eighth-grade education, they cannot work today. “We need to give them a much better education,” he said. The same is true for Arab women. “When we say that Arab women don’t work in Israel, it’s another way of saying most of them are uneducated.”

He noted that, in a world that is growing older, Israel is an anomaly because it has a lot of children, and children are a resource for the world. He also pointed out that, although the U.S. and Israel are ranked very low in the world on international educational tests, both countries come out high on confidence in their ability to master the material, a quality that can’t be taught. “We have the confidence. All we need to do is back it up with an educational toolbox.”

Israel has a major window of opportunity to make a change, he said. In a pilot program, the Israeli government looked at how studying math in high school correlated with higher wages, and found that the higher the math levels mastered by students, the higher the wages down the road. The government is now working to encourage children to enroll in advanced-level math courses.

He cautioned that if Israel doesn’t get its educational act together in time, there will be a point of no return and, “We lose the country.” This isn’t a left-versus-right issue, he added. But it does shed a new light on the idea of national security.

Previous: Linode, Moving to Philadelphia from Galloway, Subject of DDOS Attacks
Next: Steffen-Fluhr Addresses the Gender Gap for Women in Tech at NJ-Israel Commission Event