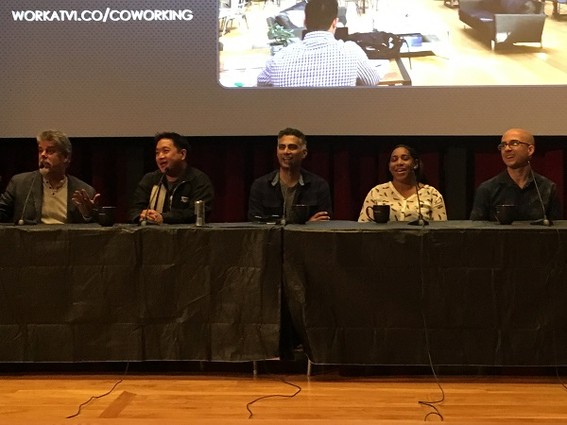 Podcasting, introduced more than a decade ago as an innovative way to provide rich and diverse entertainment, news and other information in an audio format, is undergoing a resurgence as a result of advances in mobile applications and other technologies.

This trend and other new podcasting developments were addressed by experts on May 4 during a panel discussion titled, “The Future of Podcasting in Culture and Business” at Bell Works, in Holmdel.  The discussion was part of an ongoing series hosted by NJ Strategic Design + Technology Meetup.

The panel members agreed that advances in mobile technology, social media and other digital communications channels have been instrumental in podcasting’s renewed popularity.

Recent industry statistics confirm the increasing interest in podcasting. According to data supplied by Edison Research (Somerville), 112 million Americans have listened to a podcast so far this year, an 11 percent gain over 2016. Or, put another way, the data revealed that 42 million Americans, or 15 percent of the U.S. population, listen to podcasts weekly, which is five times  the number of  those catching the latest flick at their local multiplex cinema.

Mody compared the growing interest in podcasting today to what blogging was in its heyday.  “Just how passionate people were with blogging has now moved to podcasting,” he said.

However, Mody and the other panelists believe that podcasting is still in its early days, both in terms of the numbers of users and its current technology.

For example, Mody’s company creates software that combines content in podcasting’s audio format with video, making it easier for users to record and share audio online. “You can build this immersive and interesting experience with video,” Mody said. “We think this is the next wave of podcasting.”

Moreover, podcasting is also becoming more popular among journalists as a valuable tool for enriching their storytelling.

Biese said that podcasting has been “a real game changer” in the dissemination of news, whether it’s interviews with celebrities and other luminaries or coverage of breaking stories.  Biese and Wellington Radel, who noted that their podcast is now in its second year and has logged over 150 episodes, said that podcasting has enabled them to add more depth to their storytelling.

Wellington Radel agreed with her co-host that incorporating podcasting into journalism provides a new channel that’s designed to better engage and inform people.  “I think people are drawn to the spoken word,” she observed.

While podcasting is making big strides technologically, content is still king when it comes to creating a successful podcast.

Panel members were unanimous in their view that the more passionate podcasters are about their topic and the narrower their focus, the more likely it is that they will find an audience tuning in to hear what they have to say.

“Find something that you’re passionate about. That’s what podcasting is all about,” said Zapcic, who has logged more than 260 podcast episodes with co-host Chen. “Also, the more niche it is, the cooler you’re going to sound.”