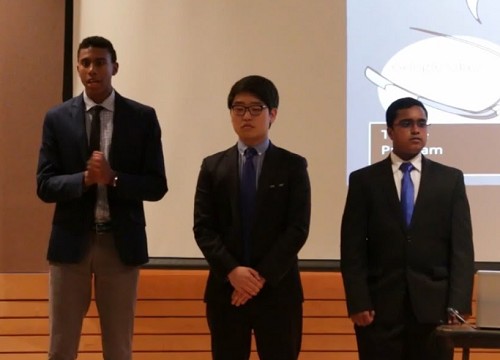 Eighty-eight students from the New Jersey Governor’s School of Engineering & Technology presented the results of their month-long research projects at Rutgers University’s Busch Campus on July 25, 2014. These projects gave them useful experience in the sort of academic work that will be expected of them in the 2014-2015 high-school year and in college.

The annual Governor’s School is only open to academically advanced students in the summer before their senior year of high school. The free program is intended to give those students access to professors, peers and professionals who can help them build their skills in engineering and technology.

Research projects are one of the Governor’s School’s main features, requiring groups of students to study and design solutions to engineering problems. This happens under the guidance of advisers and Residential Teaching Assistant (RTA) mentors, who walk the students through each step of the engineering process.

The students also had to spend roughly 40 hours reading scientific papers and writing down project ideas before they even started their first day at the Governor’s School, thereby getting some practice in reading and interpreting technical documents.

Twenty projects were featured at the final symposium, where each group presented its results with clear, informative speeches and slideshows.

Videos of the presentations are available on the Rutgers School of Engineering website, which features projects like “The Next Step in Computing: Wearable Devices.” Students involved in this project programmed a voice- and touch-controlled home automation system for Google Glass.

To accomplish this, students Rupesh Chinta, Roland Fong, William Kang, Isabel Murdock and Quinn Williamson wirelessly connected Google Glass to an Arduino Yún microcontroller board. The microcontroller board was wired to a 120-volt relay, which could switch electric devices on and off. If users had the microcontroller board and relay in their homes, they would be able to toggle lighting and air conditioning remotely with Google Glass. They could also use the glasses to view live streaming video from security cameras, baby monitors or other home devices.

Another group of students presented a project called “Autonomic Green Computing!” In this project Nikhil Gahlot, Neil Philip, Liam Stewart and Kristian Wu aimed to balance a computer’s power consumption with its efficiency. They did this by putting a cap on the amount of power expended, then maximizing performance within that limit by applying the simplex method.

The group was advised by assistant research professors Dr. Javier Diaz-Montes and Dr. Ivan Rodero, who have both conducted research in autonomic computing. The students’ RTA mentor, Daniel Hillman, also helped with the complicated assignment.

Such complexity gave students rigorous training in logical decision making and abstract reasoning. It also gave them the opportunity to learn a number of academic skills that will be useful as they continue their education.

For example, every group had to write a comprehensive final paper detailing each step of the engineering process, a process that helped develop writing skills needed for their upcoming science and technology classes. The presentation portion of the projects gave the students practice in public speaking — a major fear for many people, but helpful for communicating complicated ideas to classmates.

The members of the project groups, which ranged from three to five students each, also had to be able to exchange ideas and work cooperatively to complete their assignments. For example, one group of students participated in a project called “Soaring to Spec: Designing a Concept Aircraft for Cargo Deployment.” The students aimed to improve the design of airplanes that drop water on wildfires. They built a model plane, but designing the wings was especially challenging.

Yunseok Choi, Robert Cohen, Trisha Datta, Sumita Rajpurohit and Navin Rao spent two weeks working together to figure out the perfect design for the “airfoil,” the shape of a wing as seen in a cross section.

Their model flew successfully, and they gained experience in the kind of teamwork that will likely be expected of them in high school, college, and in their careers. The group was advised by Jonathan Holzsager, Jeet Panchal and Jim Vigani, with additional help from RTA mentor Maya Saltzman.

All Governor’s School students must be nominated by their high schools for participation in the program, and each high school can only nominate one student for every 325 members of its junior class. This means that the students selected for the Governor’s School all have exceptional academic records. But they are entering their senior year of high school with even greater skills, thanks to these research projects.