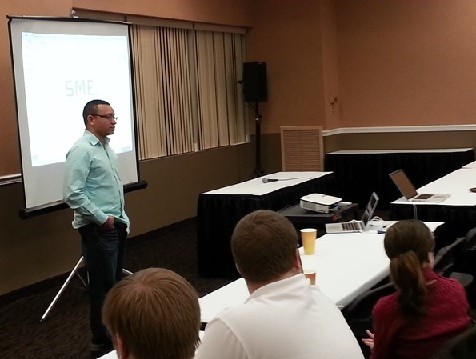 First up was David Brown-Landron, cofounder of Smart Money Entrepreneurs (SME) (New York), a venture crowdfunding platform that brings startups and investors together.

Brown-Landron explained that startup funding has traditionally focused on personal capital, loans from family and friends and the backing of angel investors and venture capitalists, which can be difficult to secure.

While SME doesn’t rule out those funding avenues, its financing method adds the unique layers of loan- and equity-based capital from accredited and unaccredited investors. SME believes a lack of capital and finance competition hampers the development of new businesses and technology, said Brown-Landron.

SME’s goal, he continued, is to connect those investors with entrepreneurs who meet the company’s requirements, clearly listed on the crowdsourcing website. Entrepreneurs must create a profile, supply their business documents and demonstrate that their product, technology or service is market-ready.

So why should a startup approach SME if it has received financing from personal capital, family or friends? One compelling reason, said Brown-Landron, is that if the initial capital target is missed (the maximum target is $1 million), the investors receive a refund.

By making sure the deal won’t go through without enough funding, traditional investors, such as family and friends, benefit from this protection. In addition, said Brown-Landron, SME doesn’t just make the introduction between entrepreneur and investor; it remains part of the process, tracking the burn rate, the valuation of the business and expenses — allowing both parties to feel confident about the brand and the relationship.

The second presenter, Nina Sodhi, CEO of Blu Trumpet (New York and Toronto), believes her company has found a solution to monetize mobile apps while creating a better experience for both customer and advertiser. Blu Trumpet advocates doing away with distracting banner ads, allowing users to actually enjoy the process of searching for apps and giving advertisers an alternative to cost per thousand (CPM) rates.

How does it work? For a fee, users opt to receive ads relevant to their viewing experience. They are able to peruse the advertised apps at their leisure, as opposed to being bombarded by distracting ads that are often irrelevant to their interests.

Sodhi pointed out that giving customers a measure of control over their advertising experience doesn’t diminish the opportunity for profit. She demonstrated this by highlighting that many people use apps not just for entertainment but to purchase items as mundane as coffee. A show of hands from the audience supported her theory. Users are integrating apps into their daily routine, allowing for a deeper level of engagement.

Sodhi named one of the drawbacks to real-time apps: users sometimes become numb to advertising. However, she pointed out that with Blu Trumpet’s system, advertisers have greater intimacy with the user, more activity and quick turnaround for providing service.

She reminded entrepreneurs and advertisers that “the goal with mobile apps is not just a download. The goal is engagement.”

When asked what’s next for user engagement and monetization, Sodhi didn’t hesitate before responding: “I think TV is one of the most underused devices. There’s no battery needed, and it’s always plugged in.” While TV is not a “mobile” device, it is one that could someday make use of applications, she indicated, since many people have already connected their TV to the Internet.