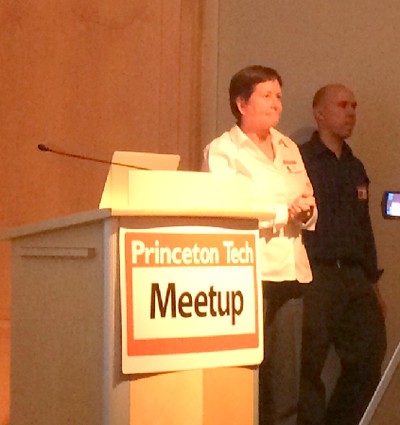 Cyndy Hayes spoke about iAssist, an app for adults with autism, at the Princeton Tech Meetup. | Esther Surden

At the Princeton Tech Meetup July 24, a startup presentation by Dr. Cyndy Hayes, founder of the iAssist Company, raised some awareness about autism.

The company’s mission, she said, is to provide a system of supports that enables adults with autism who have difficulties with language to exercise their unique thoughts and desires so that they can experience the same quality of life as their typically developing peers.

In July, the startup launched The iAssist Communicator, an iPhone app designed to meet the needs of individuals with severe cognitive and communication challenges. This is a completely revamped version of an early-communication app aimed at younger children.

Hayes knows about this. She is the parent of a 23-year-old with severe autism. “My son has no natural language. For years he carried around a very large assistive communications device. It cost about $10,000 and it was very stigmatizing,” she said.

“I was thrilled when Steve Jobs came out with the iPad,” because the tablet helped reduce the size of device her son needed to carry around, she added.

However, when she went to look at “the hundreds and hundreds of apps out there to address this need to communicate,” she found that all of these apps were designed for children.

“So I have my 23-year-old son, who has gotten rid of the assistive communications device, but now had to use something that was juvenile in order to communicate. The stigma was still there.”

Hayes’ reaction was to create an app tailored to adults. The app is photo-based, not cartoon- or drawing-based, so that it is more appropriate for those with classic autism and for adults. At $39.99, it also costs 80 percent less than the current market leader, she said. “We are very excited about this. We launched it on Monday. We are going to do a social media awareness program, and I am crowdfunding to support a second, more robust, app in September.”

The app contains 240 pre-loaded large images and associated audio files, the ability to upload your own images and recorded audio, and template files that allow the adult with autism to use images and audio to communicate wants and needs and emotions. You can also edit these files as developmental needs change.

On its website, the company notes that 5 percent of its sales will be donated to nonprofits that serve teens and adults with autism and other communication or cognitive challenges. An additional 5 percent of its profit will be contributed to “collaborative initiatives that enhance the lives of those we serve.”

The iAssist company includes Hayes, Steven George, CFO and several advisors who are experts in the education and treatment of people with autism.