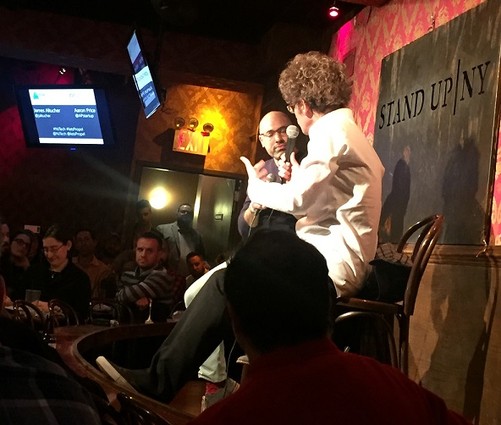 For the first time in its 7 ½-year history, Aaron Price’s NJ Tech Meetup, in conjunction with Propelify, crossed the river to the New York City side of the Hudson, hosting its 90th monthly confab at Stand Up NY on Nov. 27.

The evening’s guest of honor was James Altucher, who is an investor and a regular on-stage performer at Stand Up NY, which is based on the Upper West Side.

Suffice it to say that Altucher is a unique and multitalented individual, so it should come as no surprise that someone who is such a prolific communicator (both on stage and in print) has been exploring the challenges of standup comedy for the past year. During a typical week, he performs approximately three to six sets at Stand Up NY and occasionally ventures out to other clubs in the region.

According to Altucher, “It is the hardest skill I’ve had to learn. It really takes you out of your comfort zone, and I like that challenge. A good comedian is like a magician, you must surprise your audience to keep them entertained. Likability is important, and you also have to act as if you ‘own the stage.’

“There is a lot of preparation and study involved in getting ready for a standup appearance. You must understand your audience … where they are likely to be from and in some cases what they do for a living.”

In addition to catching him on stage at Stand Up NY, one is also likely to encounter Altucher on LinkedIn, where he is an influencer and frequent contributor. He’s also an avid blogger (www.jamesaltucher.com) and podcaster, with 280-plus podcasts and counting already under his belt.

Altucher had this evening’s crowd correctly pegged as primarily being from the New York metro area. Per usual, Price polled the audience to see who had come the farthest to attend the meeting, and a Seattle native won that honor, although it was unclear whether he was in town specifically for the NJ Tech Meetup. The audience was primarily made up of entrepreneurs, IT professionals and those employed in related areas, such as service providers.

As was demonstrated throughout the evening, Altucher combines an engaging and self-effacing personality peppered with reminiscences from a myriad of diverse career and life experiences with observations picked up along the way from numerous podcast guests and a vast network of contacts.

According to Altucher, his first professional gig was in HBO’s IT department. While in their employ, he founded the first of many companies, a Web-design firm called “Reset Inc.” He told the audience, “We were successful because I saw that the Internet was exploding and there would be a huge demand for websites.”

Before eventually completing a successful exit for approximately $10 million, he and his team had created sites for a diverse clientele, including Wu-Tang Clan, American Express and Con Edison, he said. He then began funding new Internet investments, but soon experienced a major setback, losing $15 million over two years.

Today, as he approaches 50, Altucher said that he’s founded/cofounded 20 companies (although Wikipedia claims that 17 were ultimately failures). As NJ Tech Meetup’s fireside chat guest, he was eminently qualified to weigh in on what characteristics one should look for in business partners or prospective investments.

Altucher mentioned that he had also been divorced a couple of times, so it’s perhaps not surprising that he highly values honesty and when someone is a good person. He said that these are essential prerequisites for doing business together with him or for securing a portion of his investment capital.

“I consider myself to be a keen observer of human behavior and closely watch how people treat others, as well as how they gossip about others behind their back. This will clue you in on what they might be saying when you aren’t around.”

In terms of his favorite podcast guests, he cited Richard Branson from the Virgin empire as one of the best. “He has never let obstacles get in the way of creating businesses, and he is always looking for creative ways to help people. This has helped him found as many as 400 businesses throughout his career. Branson is an expert at putting good groups of people together.”

Some additional pearls of wisdom we heard from Altucher:

Lastly,  BuddhaBooth (www.buddhabooth.com), a New York-based maker of portable private escapes for peace, quiet and rejuvenation,  won the evening’s startup pitch challenge, as voted by the audience. Honorable mentions go to a business in Jersey City seeking to address smartphone dependency (FokisOn) and a Parsippany-based mutual “fund-esque” initiative that evaluates and ranks nonprofits for future charitable donations (The Bouchedid Foundation).

Previous: Push to Bring Innovation to Healthcare Starts to Pay off
Next: Electronic Health Records Bill Seeks To Protect Against Drug Diversion Concerns