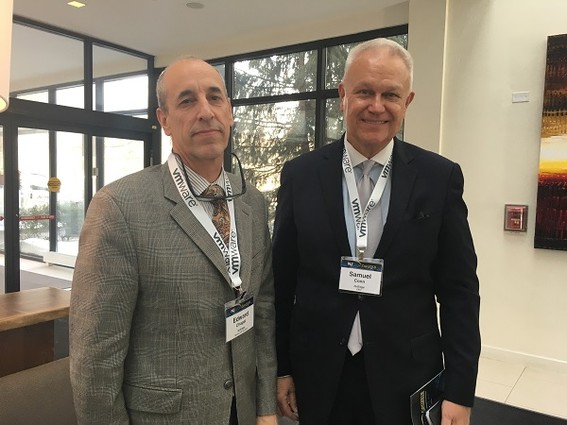 Recently, NJEdge (Newark) announced that it partnered with Amazon Web Services to create a “dedicated express lane” to the cloud for New Jersey schools and other members of its consortium.

The alliance involves a direct physical connection between AWS and the NJEdge statewide optical fiber research and education network. NJEdge members can now leverage existing NJEdge connections, or create new ones, to use AWS Direct Connect at significantly reduced costs, NJEdge said in a release.

Members will be able to establish private connectivity between AWS and their data centers, offices, or colocation environments. They will also be able to extend their data centers onto the cloud and access resources such as Amazon Elastic Compute Cloud (Amazon EC2), Amazon Relational Database Service (Amazon RDS) and VMware Cloud on AWS. In many cases, these connections can reduce costs, increase bandwidth throughput, and provide a more consistent on-demand network experience, NJEdge stated.

NJEdge is a member-driven, nonprofit consortium of academic and research institutions that provides high-performance optical networking, Internet, digital asset-management solutions and IT products and services to its members at below-market costs.

Well known in higher-education and academic-research circles, NJEdge continues to grow, broadening the scope of its thought leadership and technological guidance to a diverse membership, including state and local governments, healthcare institutions and K-12 schools. The 60-member consortium is spread throughout the continental U.S., with most of its members in New Jersey. The consortium is governed by the New Jersey’s Presidents’ Council and housed at NJIT (Newark).

In January, the consortium held NJEdgecon2018, an annual conference for its members where they learned about best practices in their industry and how to get the most out of NJEdge products and services.

Speaker Wayne A. Brown, the founder of Center for Higher Education Chief Information Officer Studies (Albany, N.Y.), talked about the role of the chief information officer at colleges and universities, noting that his research findings pointed to a lack of diversity among them.

In a presentation about the New Jersey Big Data Alliance, Margaret Brennan-Tonetta, president of the NJBDA, updated the attendees on the organization’ progress toward making big data a driver for economic development in New Jersey. She said that to compete with states like Massachusetts and New York, which have made big investments in big data and data analytics, New Jersey colleges and universities have had to unite to offer services. As it happens, there are big data assets all over the state. For example, she said, Rutgers has its supercomputer, but Rowan University has excellent data visualization resources.

The partnership between NJEdge and AWS seems to have benefited educational institutions and other organizations that are dealing with two cutting-edge trends, said Samuel Conn, president and CEO of NJEdge, and Edward Chapel, senior vice president and COO, in an interview with NJTechWeekly.com.

Chapel told us that one trend concerned the changes in demand in the area of research flows. Conn explained that agencies funding research at universities are “no longer much interested in a single-institution research efforts. They want it to be collaborative.” For example, there could be five institutions that want to work together on a complex problem. “That’s where we fit in.  We can do the connections, give them high-speed bandwidth to move data back and forth and respond to that collaboration need.”

Chapel added, “To the extent that we have built out and made our network have more capacity in-state, there is demand now for us to connect domain research organizations across states, as well. We also have technologies for monitoring the flows or curating the content and depositing it in shared research environments,” he said.

The second trend is the growing interest in experimenting with blockchain processes. Conn and Chapel addressed the resulting need for bandwidth and cloud services at the schools and universities engaged in this work. Conn noted that the AWS partnership will help its members develop these blockchain capacities in the cloud.

Even before these trends emerged, NJEdge had adapted to the greater demand for bandwidth at schools using prodigious amounts of video and online streaming, by both faculty and students for both academic and personal use.

NJEdge also offers business-transformation services to schools and universities. “In this Google era, students want to know: Why can’t you be like Google? When an educational institution touches every part of a student’s life, you need to offer a high level of service, always be available, and do everything you can to deliver a positive student experience,” said Conn. “We help connect schools with the tools they need to do that.

“And it’s hard. It starts at the basic business-process level, reengineering all those processes, building off of that into workflows, and using technologies to enable an ecosystem of how information moves fluidly. You always work, you’re really powerful, you do a whole lot of stuff. We are constantly responding to those kinds of demands, as well.”

The OOHLALA app integrates directly with universities’ learning management systems and student information systems, as well as with other critical student-service systems and data sources, according to a release from NJEdge.