Vidyo, the N.J. startup that is innovating in the video conferencing space, has further developed its disruptive technology by making its video router virtual. The company already has “telepresence” solutions–as they are known–that undercut expensive enterprise systems from mega-rivals Cisco Systems Inc. (San Jose, Calif.) and Polycom Inc. (Pleasanton, Calif.).Vidyo said it would be selling the virtual technology sometime in 2012 but would not provide an exact time frame.

In an interview, a company spokesperson said 100 percent of the virtual router’s R & D had taken place in N.J. Ofer Shapiro, CEO and co-founder, told us via email that Vidyo, headquartered in Hackensack, positions most of its management team in N.J. even though the firm has a Silicon Valley presence. “There’s a tremendous engineering pool here [in N.J.], world-class talent,” he noted.

Shapiro added that because the firm is “in the videoconferencing business and can connect to employees, partners and customers anywhere in the world, … it doesn’t matter where we are located. I have days where I’m working face-to-face with customers on three different continents all over Vidyo’s personal telepresence systems, on room systems or from my iPad, iPhone or laptop.”

According to the company, the newly announced virtualized VidyoRouter can be run on virtual machines and exist on hybrid, private or even public clouds like Amazon Web Services. Vidyo said the product had proved its concept and delivered a high-definition videoconference on more than 100 concurrent lines.

Making the VidyoRouter virtual will allow resellers and OEM software providers to offer Vidyo system-based services for a fraction of today’s systems’ costs because there is no hardware involved, the company claimed. The virtual router may prove even more disruptive to the video telepresence market than its software-based predecessor.

A slide with “illustrative pricing only” showed the cost of delivering a videoconferencing system globally, for a hypothetical system of seven ports per three regions, at $17,000 for the new system, compared with $600,000 for the non-virtual, hardware-oriented system that enterprise-grade global telepresence systems require today. The company further indicated it could deliver this with the quality users expect of enterprise-grade teleprocessing systems, with little latency and no jittery video.

The virtual router will make it very easy for companies to “scale up” to many users, depending on the individual call’s needs. Companies will be able to conduct videoconferencing calls in areas where it is difficult or not cost-effective to deploy hardware, Vidyo noted.

“Hardware-based solutions are not scalable and have limited capacity for multipoint videoconferencing, requiring costly multipoint control unit (MCU) devices that have to be pre-provisioned in data centers instead of providing availability on demand,” Shapiro explained. Multipoint media processing mixes multiple video streams, a function traditionally performed by MCU units and that is not scalable, he added.

In September, Vidyo closed on a $22.5 million Series D funding round led by QuestMark Partners (Baltimore) and has received $97 million in funding so far. The company said it has 10 patents issued and 42 pending. It has also won many prestigious awards, including the Wall Street Journal Innovation Award for Networking, Internet and Broadband.

1854 More posts in News category
Recommended for you 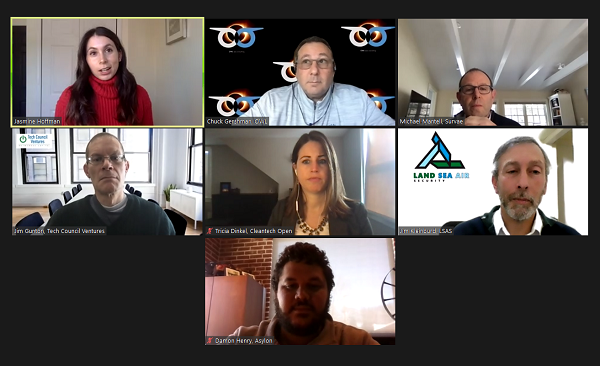 Three startups with ties to the autonomous vehicle and drone industries pitched at the February...

Interested in local N.J news? Here’s a way one group is investing in its future. | Opinion https://buff.ly/3beMh4c