Home » Around New Jersey » Nobel Prize winner, co-inventor of the laser remembered as pioneer at his former N.J. lab 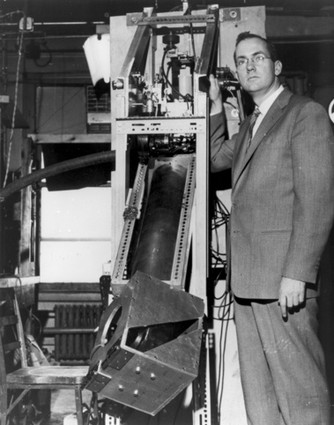 Dr. Charles H. Townes, co-inventor of the laser, stands with a ruby maser amplifier, a device that paved the way for laser technology, in a 1957 photo. | Cortesy Alcatel-Lucent Bell Labs

[This story was originally posted here. This excerpt is reposted with permission of NJ Advance Media and Katie Lannan.]

MURRAY HILL — When Bell Laboratories announced consultant Charles Townes’ 1964 Nobel Prize win, the statement they sent out heralded the new technology of lasers as an invention that “holds promise” for the fields of research, industry, surgery and communications.

Working with his brother-in-law, Townes secured the first patent for a laser in 1959 through Bell Laboratories.

Townes, hailed as one of the co-inventors of the laser, died Tuesday at the age of 99.

Townes started work at Bell Labs in 1939. Employees of the company — now a part of global telecommunications company Alcatel-Lucent — say the work he did there helped lay the foundation for today’s era of constant connectivity.

“His work is — to communications, to the Internet, to mobile phones, it is critical,” Alcatel-Lucent/Bell Labs archivist Ed Eckert said Thursday.

Townes’ stint as a Bell Labs scientist lasted about nine years, during which he worked on radar systems for bombing and navigation in World War II.

“We weren’t in it yet, but in Europe, they were already fighting, and we partnered with the British to develop radar,” Eckert said. “That became Townes’ specialty.”

Townes grew interested in microwaves, which in radar systems bounce off solid objects — like a battleship — to reveal location and size.

He left Bell Labs in 1948, taking on a position as a physics professor at Columbia University. There, in 1953, he built the first maser, a microwave-amplifying device he had jotted down the idea for two years earlier on the back of an envelope.

Previous: Technology Marketing in the Digital Age: Want to create opportunities for your B2B business? Here’s How to Start a LinkedIn Group
Next: NJ Tech Companies Tell Executive Suite Changes