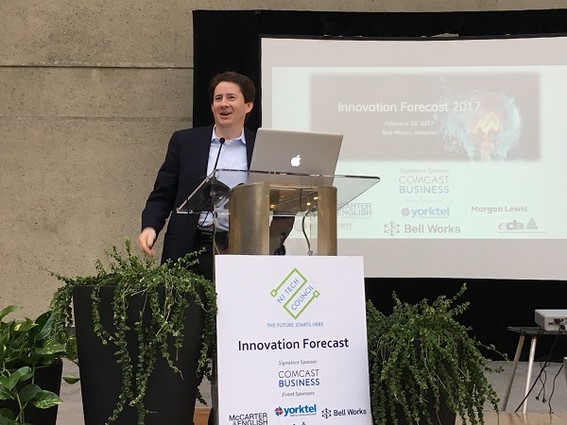 In its initial phase, 5G will be an outdoor technology. “Think of the 200-acre Murray Hill location as being developed as a 5G campus,” said Marcus Weldon president of Bell Labs and CTO at Nokia. “In its first incarnation, 5G will be hyperlocal, using a millimeter wave spectrum, which typically only propagates hundreds of meters.”

That’s why 5G will initially be a local-environment network, he explained. “The mobility parts and the more global aspects of 5G will be built out over time.”

The first places the public will see 5G will be campuses, stadiums, airports and inner cities, where its attributes should allow it to work well. “That’s what we’ll be building in Murray Hill,” Weldon said.

Intel will be contributing a number of pieces to the campus-wide laboratory. “They have test equipment they’ve been developing for 5G networks that we’ll be using to test the network. They have some customer-premises equipment. Think of it as the modem side for the home or, in the future, for handsets.”

Nokia will be adding its own networking equipment, including the core network that manages the roaming from cell to cell within a campus, the radio, and the modem that talks to the radio, Weldon said.

Bell Labs will also be contributing some experimental tools for emerging technologies, including some new air interfaces and massive MIMO, also known as “large-scale antenna systems,” he added.

“We will be building that all together so we can have anyone come and test out a 5G application or service that they imagine,” he said.

According to Nokia, Bell Labs will be working closely with communications service providers and other companies in the 5G ecosystem to support comprehensive integration and testing. This will help those providers derive deployment options and identify operational models needed to make 5G a commercial reality. This lab work will be done in accordance with Third Generation Partnership Project (3GPP) standards.

Among the 5G attributes are ultralow latency, down to a millisecond; ultrahigh capacity, from one to 10 gigabits per second; and hypermobility, known as “hyperlocal latency,” achieving speeds of more than 500 kilometers per hour, Weldon said.

“There won’t be anything moving around Murray Hill at those speeds,” Weldon joked. “You could quickly get from one side to another of the Murray Hill campus and not be able to stop.”

Another attribute of 5G is “hyperscale,” the ability to support millions of things. “That we will be able to test, although not millions, tens of thousands. … We will be equipping Murray Hill with all sorts of sensors and robotics, and moving things that we will attach to this network,” Weldon said.

Nokia Bell Labs hasn’t quite decided on the exact set of autonomous things it will be attaching to the network, he explained, but it will include some vehicles. “We have some race cars we race around that use 5G. You can imagine robots roaming the halls delivering things and drones flying doing some kind of drone delivery or monitoring task.”

It will be an outdoor lab, Weldon reiterated, and the whole campus will become the lab. “One of the annoying things about millimeter wave technology is that it doesn’t go through walls. It does go through windows. So you have to figure out how to optimize it and focus the beams through windows.” It can also go through foliage with a bit of attenuation, or loss of signal. “There’s a lot to be learned about how to make sure you have continuous connectivity.”

Near the end of the interview, Weldon issued an invitation to all the New Jersey gubernatorial candidates. “Come to Bell Labs,” he said, take a look at our technology and innovations as well as our 5G lab, then use our auditorium for a town hall meeting.  Bell Labs, he said, can show the next governor what innovation in New Jersey looks like.