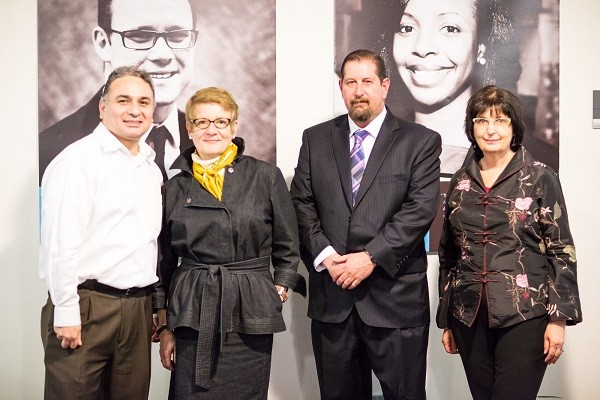 On March 20, NPower held a reception in Jersey City to celebrate the registration of its IT Generalist Apprenticeship Program with the U.S. Department of Labor.

After finishing the program — which includes a course, an internship and on-the-job training — participants receive a Certificate of Completion of Apprenticeship and the title of IT generalist.  This is a new direction for the Department of Labor, which has traditionally recognized apprenticeships only for manual trades.

“It is a great opportunity for vets to get a job,” said Byrd. “I heard of other opportunities that don’t really provide at the end. This is great.” Indeed, Byrd found his current job through his internship under the program.

Anise Ward, a young graduate of the program, told NJTechWeekly.com that she also got a job after her internship. She now works for Great Oaks Legacy Charter School as a technical coordinator, troubleshooting and maintaining computer operations.

NPower (Brooklyn, N.Y.), a national nonprofit organization with offices in New Jersey, has just signed a “Standards of Apprenticeship” agreement with the Department of Labor to sponsor a registered “IT Generalist” apprenticeship program for training young adults and veterans for in-demand technical careers in New Jersey. This is in addition to the many accelerated computer-training programs that NPower already offers. Thus, the new apprenticeship program furthers NPower’s mission to “create pathways to prosperity by launching digital careers for military veterans and young adults from underserved communities.”

NPower provides free IT career training that helps students get industry-recognized credentials such as CompTIA A+, CCNA and Microsoft Certified Professional (MCP). In addition, NPower helps graduates get paid internships and job opportunities with Fortune 500 companies. The company has already found a partner for the apprenticeship program: Atlas (Berkeley Heights), a consulting firm that specializes in workforce management and job placement. Atlas has hired NPower graduates in the past and will help place IT generalists who complete the NPower apprenticeship program.  Byrd interned at Atlas, before being placed in his current job.

Founded in 2002, NPower expanded into New Jersey in the fall of 2015. The apprenticeship program started in December 2015. It is a 15-week, half-day program that teaches many computer skills, as well as the work and social skills necessary for success. The course is followed by a seven-week paid internship and then by 30 weeks of on-the-job training.

The reason NPower chose to expand to Jersey City is stated on NPower’s website: “The most densely populated county in New Jersey, Hudson County is home to some of the most ethnically and linguistically diverse communities in the country. Despite a concentration of Fortune 500 companies in Jersey City’s downtown, poverty and unemployment remains high within some pockets of the city and county. With nearly 40 percent of Jersey City residents being between the ages of 18 and 24, NPower is committed to training and preparing young adults for high quality jobs in the technology sector.”

Béatrice Tassot, NPower regional director for New Jersey, whose son is a Marine, said, “I pushed hard for the program to include training for vets. Any vet could be my son. Some vets have unique challenges. I’m glad to help.” Indeed, Byrd is a good example. Unable to drive to his job, which is a half-hour ride from his home, he commutes three hours — each way — by public transportation, while looking to relocate!

“Since our New Jersey program launched, we have trained over 45 young adults and veterans, 75 percent of which were granted extended internships, placed in full-time jobs, or decided to continue their education.” Tassot added.

NPower CEO Bertina Ceccarelli said, “Next we will bring our cyber security training to New Jersey within a year. This includes Linux+, Network+ and CompTIA certifications. This is 14 weeks of classroom training and 12 weeks of internship. Right now, New Jersey residents can go to [our] Brooklyn [facility] for this training.” Ceccarelli then noted that “NPower is funded by grants, and the apprenticeship is mostly funded by the [U.S. and New Jersey] Departments of Labor.” Notable private sponsors include: Verizon, JPMorgan Chase, Atlas, Bank of America, and the Hyde and Watson Foundation.

Previous: Liberty Science Center Expansion Wins Key Vote from Council
Next: Technology Marketing in the Digital Age: How to Use Your Company Videos to Improve Customer Engagement