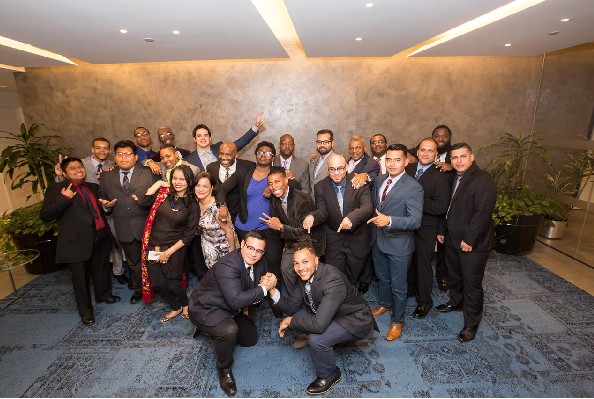 NPower’s Jersey City program held its third class graduation on June 27 at the offices of Pearson Education in Hoboken.  NPower’s mission is to “create pathways to prosperity by launching digital careers for military veterans and young adults from underserved communities.”

Attending were 33 graduates, along with teachers, administrators, parents, members of the board and sponsors who hire NPower students as interns. NPower educates two kinds of students, veterans and young adults, and both were well represented at the ceremony. Michael K. Gray, director of constituent services for Congressman Donald M. Payne Jr., also attended. Michael Rasmussen, program manager at NPower, MC’ed the event.

Ceccarelli was followed at the podium by Anthony Plummer. A veteran who’d been an aviation machinist in the military, he learned to be a computer service technician at NPower. Plummer spoke with enthusiasm and humility, saying that in the service he had learned that no one goes it alone. “We did it together,” he said, looking around at his classmates. “We got through this course together, either by hard work or helping others.”

Davon Joiner, another student, spoke about the challenges of NPower’s rigorous course while having to care for two small children. He said that NPower gave him hope and a future.

Anise Ward, an alumnus, spoke encouragingly to the graduates about how her hard work had paid off. Ward had already earned an associate technical degree before taking the NPower course. After graduation, she worked as a system administrator and then completed her bachelor’s degree in computer science. Ward is now working on her master’s degree in cyber security. Like many other speakers, she told the graduates that “hard work pays off.”

Tim Bozik, president of global product at Pearson Education, gave the official commencement address. At Pearson, Bozik focuses on the design and development of digital products and services that help people “make progress in their lives through learning,” and he explained to the audience that his company believes in “advancement through education.” He said that Pearson’s was happy to host the graduation and noted that it is an NPower sponsor and hires NPower graduates as interns.

Several students in both the veteran and young adult categories were given awards for their achievement during the course or for their contributions to the NPower learning community, including  outstanding assistance given to their fellow students. For instance, Joshua Richards, director of business relationship management at Pearson, presented the Always Learning Award to Latoya Robinson (veteran) and Joab Arzua (young adult).

Mars Incorporated, a global confectioner with a facility in Hackettstown, is also an NPower sponsor. Joe Carlin, director of technology service delivery at Mars, and an nPower board member, told the attendees that Mars hires interns from NPower and brings in NPower students for tours.

Vittorio Cretella, CIO of Mars and a member of NPower’s National Board of Directors, is a veteran himself, with seven years of military service under his belt. Cretella will soon be retiring after 26 years at Mars, 23 of them in IT. He bestowed the Defying All Odds Award to Alfonso Maldon (veteran) and Tania Wright (young adult), and the Emerging Leader Award to Jasper Parker (veteran) and Adriano Rodriguez-Urena (young adult).

Cretella told the graduates, “While I am here to present awards to a few distinguished students, I believe all graduates are winners today because they demonstrated how commitment and willingness to learn and improve can lead to real change. As I am about to retire from the role of global CIO at Mars, I wish that all graduates who are about to start their professional journey will have the same fulfilling and engaging experience I had during my 26-year career.”

The last to speak was Gray, who reminded the graduates that all their hard work, especially the computer skills they had learned, would serve them well in their careers. However, they must remember that the workplace is all about people. “If you can’t work with people, all your computer skills are worthless,” he said.

Companies that are not sponsors, but have hired NPower interns, such as Gadget Software (Newark), told NJTechWeekly.com that they were very happy with the performance of their NPower interns.