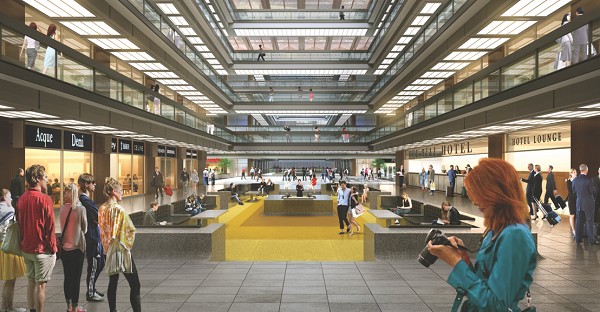 In late May we learned that WorkWave, the growing cloud-based field-service and fleet-management software company, now located in Neptune, signed a lease at Bell Works, in Holmdel.

This was an exciting development because it gave Bell Works, the newly redesigned iconic Bell Labs building, a larger anchor tenant. WorkWave is bringing its more than 150 employees to the massive building. It will occupy a 72,000-square-foot space there, with an expansion option for an additional 72,000 square feet.

WorkWave was aided in its quest to move to the new quarters by the approval of a Grow NJ tax incentive, administered by the New Jersey Economic Development Authority (EDA). Grow NJ is a job-creation and retention incentive program meant to strengthen New Jersey’s competitive edge against tax-incentive programs in neighboring states.

Now we are learning that both iCIMS (Matawan), a recruiting resource software provider that is also experiencing great growth, and a company called “MetTel” (New York, N.Y.) have also been offered incentives by the EDA to relocate to Bell Works.

The EDA approved a 10-year, $38 million tax credit for iCIMs under the Grow NJ program. There is no guarantee that iCIMS will accept this offer, but if it does, the company will relocate to a 339,000-square-foot space at Bell Works, and will bring 552 employees to the site, in addition to hiring 390 more as soon as it can, according to sources.

The EDA also approved a 10-year, $4 million tax credit for MetTel, which plans to locate 100 jobs and lease 30,000 square feet at Bell Works.

With iCIMs and MetTel, as well as WorkWave and other tech companies willing to take a chance on the facility, Bell Works can be seen as a large magnet, drawing tech companies and their development staffs to its premises.

Bell Works has already signed leases with several tech companies that already have New Jersey locations, including Spirent Communications and Suttons International. Symbolic IO, a startup headquartered at Bell Works, just emerged from stealth mode with a suite of products designed to change the way industry defines storage and computing architecture, according to a press release. The driverless car software company NVIDIA, and McCann Systems, audiovisual technology consultants and integrators, were both early tenants. The Asbury Park Press recently noted that Bell Works “has a co-working space called Vi Collaboration Hub that is operated by Chris Palle and Sean Donohue, consultants who teach businesses innovation and design.” Investor Jay Bhatti, of BrandProject, also has an office at Bell Works.

When Somerset Development started this project, people wondered if it could pull off converting a building created by the well-known architect Eero Saarinen in the 1960s into a contemporary office space that current companies would be interested in occupying. The developer was very mindful of the building’s past and its meaning to the folks who worked there. Benjamin Doda covered Bell Works for us when it opened its doors to tenants last year.

It’s not just nostalgia that keeps people coming back to Bell Works, although nostalgia is a big part of it. When I go to meetups that take place in the building, there are always folks who have come to rehash their experiences working at Bell Labs. Bell Works keeps the legend alive, and even has memorabilia in the lobby.

Former Bell Labs workers tell me they are delighted that Somerset Development is has taken steps to breathe fresh life into the building, creating a mixed-use scenario that will attract a more contemporary crowd. The developers envision a pedestrian “street” within the building’s quarter-mile-long atrium. The area will connect tenants and visitors to dining, entertainment and health and wellness services, along with renovated office space and educational facilities, a hotel and a conference center.

As Chris Sullens, WorkWave CEO, told the Wall Street Journal, “We saw it [the move to Bell Works] as a way to not only retain people but to attract people who are commuting into the city and give them an alternative.”

“We thought this was a great way to take our environment, supersize it, if you will, and put it in a place that had a whole bunch of amenities around it,” he added.

NJ Tech Weekly.com is delighted to see Bell Works emerge as a gathering place for tech companies, and we hope it continues to do so, as Holmdel once again becomes a genuine hub for tech activity and innovation in New Jersey.