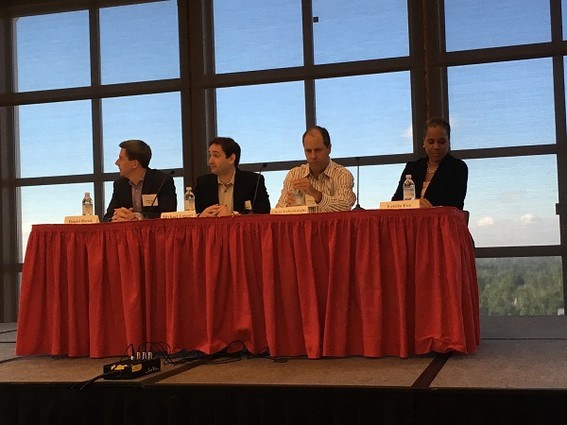 Panelists discussed the internet of things at a Feliciano Center program in August. | Esther Surden

The internet of things and the data it yields are full of risks and rewards, and New Jersey is poised to get its share of both. So concluded a panel of investors, computer science educators and business execs who spoke about iot disruption at a conference called, “Tools for Decision Making: Innovating in a Changing World.” It was hosted by the Feliciano Center for Entrepreneurship, at Montclair State University on Aug. 3.

First, a nontechnical definition from Leecia Eve, vice-president of state government affairs at Verizon for New Jersey, New York and Connecticut: “Think of the internet of things as a sensor that tracks all different types of things — location, light, proximity to other things, temperature, motion, vibration, humidity, altitude, color. At its most basic form, it’s a sensor, transmitting to another machine, and then that data is used to have the end user do something or to have yet another machine act on that data.”

She was talking about some of the sensor-based products Verizon has developed or acquired. In addition to its metamorphosis into a media and content company through  its acquisitions of AOL and Yahoo!, the one-time “phone company” announced this week its purchase of Ireland-based Fleetmatics for $2.4 billion, to help expand its iot capabilities in the fleet space.

Panel moderator Barbara E. Kauffman, executive vice-president of the Newark Regional Business Partnership, noted that it’s time to throw the five-year plan out the window. How about the two-month plan? And what makes sense as a business proposition — sensors for warehouse workers to wear in their shirts to make heavy lifting easier or a service that virtually packs your suitcase without knowing who you are or what you want to do at your destination?

While it’s the B2C wearables market that gets the media attention, it’s the B2B space that shows the most commercial potential.

Daniel Borok, managing partner of Newark Venture Partners, said that one of the fledgling fund’s first three investments was StrongArm Technologies (Brooklyn, N.Y.). The startup’s technology leverages sensors in a sort of exoskeleton worn by warehouse workers. It monitors the workers’ physical responses to lifting weights and tracks stress points.

The idea is to make things more efficient for everyone, so that workers can be given the loads their bodies are most equipped to handle. In addition, the company is creating a database for future workers’ comp claims based on an understanding of how the body responds to heavy weights.

If this sounds as if it has a bit of a creepy side, it does. Michael Liguori, founder and CEO of Vognition (Oakland), a voice portal to your home, predicted that it’s just a matter of time before the government starts legislating the iot space and the use of data. Vognition’s natural voice product is now installed in more than 100,000 homes across the country, and the company was incubated at the NJIT Enterprise Development Center.

“Legislation is on its way,” he said. “Eventually, privacy will become such an issue,” the government will say that this has to be regulated.

Still, Liguori said, “what we’re seeing is a privacy personalization paradox. We’re seeing more and more people are willing to give up their privacy if they’re getting something that is customized.”

Christopher Leberknight, associate professor of computer science at Montclair State University, pointed out cases already known to the public in which iot-enabled devices have been hacked. He said that cybersecurity is an ongoing part of the curriculum he’s created, and students regularly practice breaking into things so they can figure out ways to protect them.

Millennials, he says, are just now understanding the professional implications of what they’re sharing online. And the best recent example he cited was the Pokémon Go craze. “Originally, when that application was installed, it required full access to the phone. It could read your personal photos, read your email, send email on your behalf, and people did it,” he said.

Buried in the 20-page privacy policy was a statement that “we’re not really responsible for how our partners use that information,” Leberknight noted. “The scary thing here is how do you control and how do you manage who’s going to have access to your data? The fact that these apps can provide real-time data is especially critical.”

“We would never return to horse-drawn carriages,” said Eve. “With any technology there are downsides and risk because you’re not always going to have responsible behavior. The best thing that probably happened to every business in this room was the development of the Internet. Well, that also happens to be a place where pedophiles hang out. In any space, you’ll have bad actors.”

Borok noted that the tri-state area is outgrowing every other region in the country in terms of capital venture investing — including Silicon Valley and Boston. One of the pillars of Newark Venture Partners’ mission is job creation in Newark, a city that has access to both a technology backbone and talent from the region’s tech companies. NVP was spearheaded by Donald Katz, the founder and CEO of Amazon subsidiary Audible, and it’s housed in the same building as Audible and Rutgers Business School.

Previous: 10 Questions for Michael Bonner, Founder and CEO of Property Pilot and GovPilot
Next: On Innovation Day, Educators Learn about Future of 3D Printing