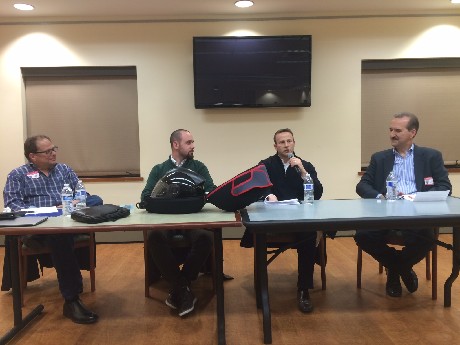 Rosen, a serial entrepreneur, described his new venture, TechX Foundry, to be located in the Secaucus area, as an innovation center that will provide “technologies, people and support in one place for companies and startups to research, prototype, make/manufacture and test whatever you want to build or repair.” His company will also help take those concepts to market.

“Our real purpose is to help people commercialize their products,” he said.

On the panel were three founders of companies at different stages of development.

Ryan Shearman, founder and CEO of FUSAR Technologies (Jersey City), discussed issues from the early-startup point of view, as well as his own past experiences in other industries. FUSAR is developing an intelligent motorcycle helmet that, among other things, will reduce riders’ blind spots.

Seth Tropper, now working for Yahoo, had been the founder and CEO of S2H, whose IP was acquired by Fitbit. He spoke about his experiences in making an innovative sensor-based fitness product, and discussed his development of prototypes for  the Stevens Institute of Technology spinout PlasmaSol.

Henry Wojtunik, founder and CEO of Fiber-Span (Branchburg), talked about the early struggles and successes of his company, which designs and manufactures radio-frequency (RF) distributed antenna systems for the wireless, radio and defense industries.

Wojtunik’s company started at an incubator at Rutgers that is now defunct. He said that, in the early 1990s, he was at a fiber optics company that made components for telecommunications. He got excited about the idea of applying radio-frequency technology to fiber transceivers so they could run for long distances. The company he was working for wasn’t interested in pursuing this possibility, but Wojtunik was, so he started his own company.

The first things Fiber-Span did, he said, was to make a few innovations, combine the sensors into one transceiver product, and add some functions. “But most of the successes we had came from the relationships I had developed prior to leaving the company. I was an engineer, but I wasn’t doing engineering, I was doing sales and marketing. I knew the customers and I had a channel to the market. What I didn’t have was someone who could design [the product].”

Wojtunik said that he went to friends, coworkers and others to find engineering help for the design. A first attempt at bringing an engineer onboard was a disaster, he said, when an early shipment had not been thoroughly tested, and was rejected by a customer for working poorly.

Finding the right people had a lot to do with why FUSAR’s Shearman moved his startup from the Techlaunch accelerator, in Clifton, to offices in Jersey City. “While it was great being at the accelerator, where we had other entrepreneurs right there that we could tap into and seek advice from, and having Mario [Casabona] in the office as a fountain of knowledge, was wonderful— ultimately, pulling talent from New York was hard.”

“We wanted to stay in New Jersey. We are a startup founded by a bunch of Jersey boys. At that point, 75 to 80 percent of our funding was all from the state of New Jersey. We wanted to stay, so we located in Jersey City, four blocks from the PATH. Two of our employees come in from Brooklyn. … That wouldn’t be sustainable if we were still in Clifton.”

Speaking about prototyping, Tropper noted that, at PlasmaSol, “We had a lot of intellectual property that was critical in our exit, but although it was a technology that we sold to Stryker Medical pre-product, it was really, really critical for us to go through the development of hardware platforms and prototypes to understand what this technology was, what its capabilities were, cost factors, etc.”

Tropper said that the company spent a couple of years developing multiple prototypes. “That was really the one thing that helped us with that exit. We needed to have the prototype to show our acquirer, Stryker, and other potential acquirers that we talked to along the way. They needed to be able to see what we had envisioned, so they could visualize how they could use the product,” he added.

S2H started by working with an industrial-design firm in New Jersey on the development of sensor technology, selecting some sensors and putting them into a product to build a proof of concept, said Tropper. As S2H refined the product and began to think about manufacturing, the founders worked with an independent industrial designer and did some research on their own by talking to a half dozen or so manufacturers.

“Unfortunately, we had to go overseas, given the price point we were at, given the type of product we were after, a consumer electronics product. We weren’t going to manufacture here in the States.”

The founders interviewed manufactures from China and South Korea, though they did not travel these countries. In any case, some of the outfits they were dealing with had reps in the U.S.  After starting their manufacturing with a firm in Korea, the founders switched to a manufacturer that was actually headquartered in New York, but had staff and manufacturing facilities in China. “There was a lot more comfort level in what we were doing,” Tropper said.

Tropper was frank about the problems he encountered with regard to quality. The low price point meant that “we would get pushed to the back of the line,” and have to wait for supplies from certain vendors that were inevitably delayed. “We’d have things sitting at a factory, and the line would be ready for us. What happens if they shut down the line? We couldn’t get in for X number of months later.”

Tropper noted that the founders overcame those challenges, learning lessons along the way; and at the end of the day, they were able to produce a quality product for the price they had targeted.

Wojtunik said he had had a different experience because his was a lower-volume, higher-priced product that needed a lot of customization. “There really was no opportunity to send it overseas.”

Much of the work for Fiber-Span was done in New Jersey, though the company also used a firm in Pennsylvania that could do patches at the PC-board level. “We went to the site quite often. They hand-delivered parts to us, and we hand-delivered parts to them. We needed that kind of quick interaction on a small-batch basis. We did the final assembly, especially in the later years, when our product became part of a system.”

FUSAR is doing its prototyping in-house, in a new workshop at its offices in Jersey City. “We do the 3D printing and prototyping in-house,” said Shearman. “There’s an entire area dedicated to soldering … we are not etching boards in-house. There are components we are sourcing externally, but everything is hands on.”