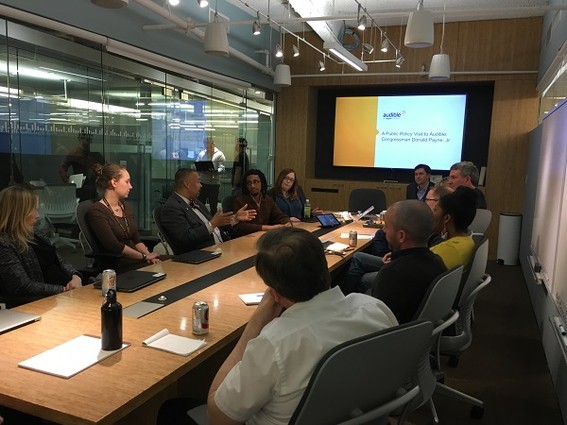 On April 4, Representative Donald M. Payne Jr. stopped by the offices of Audible Inc., in Newark, to talk to employees about public policy.

Most of the issues brought up by the employees could be placed in the category of “quality of life” — if not for them, then for other members of the Newark community. The employees were concerned about the lack of high-wage jobs for their neighbors, the rate of incarceration, the quality of the schools, the transportation system and many other social and economic problems.

Participating in the discussion was Donald Katz, Audible founder and CEO, who had met privately with the congressman prior to the roundtable. Their discussion centered on what companies like Audible need from government to be able to continue innovating, creating jobs and growing the tech industry in the city.

The discussion was a “great opportunity to hear directly from the Audible team about their work to transform Newark into a center of technological innovation and entrepreneurship,” said Payne. “Audible is committed to unlocking the full potential of Newark and fueling the city’s revitalization by tapping into the diverse talent in our communities.”

“I look forward to a continued dialogue with Congressman Payne Jr. and other national, state and local policy makers to craft more targeted public policy that can help connect the beleaguered urban core to an early-stage technology-driven growth economy that is creating jobs and taxable revenue by the day,” Katz said in prepared remarks.

During the roundtable, one of the employees said that she was honored to have a job at Audible that’s fulfilling and affords her a fantastic lifestyle, but “so many of the people I live around don’t have that luxury. If they are working, they are working part time,” or they are working at jobs that don’t pay them a sustainable living wage. She asked the congressman what was being done to address that, not only for people who are just entering the workforce, but for those who have been in this situation for decades.

Noting that it takes a good education to be able to succeed at a place like Audible, Payne added that “this is something we have to continue to work on.” He also pointed out that there was a lot of retraining going on for workers who might have spent 20 years at a single job. “The model these days is that you don’t find many of those jobs.”

Katz interjected that HelloFresh, the meal-kit delivery service, is moving several hundred people to a Newark warehouse that will be used for food processing; and the warehouse will be hiring.

In addition, there are all kinds of new manufacturing options, he added. The issue is to let people know about Newark as a destination for relocating their manufacturing businesses, with a population that could be trained to fill the jobs.

People with just a high school degree can be trained to operate high-tech machines, and thus have a high-paying job, Katz said.

He noted that when he saw the maps showing the high-speed fiber cables under the streets of Newark, he thought of them as a natural resource, much like the quality of the aquafer, which made Newark the city of choice for breweries in the past; or the depth of the harbor, which gave Newark an edge in the shipping industry.

“I think we should really focus on it [the fiber]. There are so many unimagined businesses” that could be developed, “to say nothing of power grids that don’t go down,” Katz said.

Another Audible employee asked Payne if there’s a particular law being debated in Congress right now that could have ramifications for Newark. He replied that the whole question of mass incarceration would have some direct impact on Newark.

“We know… that in the next decade, 7,000 people will come out of incarceration and back into this area alone. We are talking about a lack of jobs for people who” have not been incarcerated. Now, “what do you do about that population coming home [from prison] with few skills?”

Payne added that the chaos that you see in Washington is a “controlled chaos” put on for the cameras, but once the legislators start talking about these issues, “it’s not as bad as it looks.”

The congressman also took a question about the lack of funding for programs that help the city’s LGBT community or that work to stem the spread of AIDS among at-risk youths. Payne said that there is a national conversation going on about the use of heroin in the northeast because it has spread to the suburbs. “But it has been an issue in Newark for 20 years.”

The question, he said, is “when does an issue become important enough” for someone to do something about it. And that pertains to what’s happening in the LGBT community. “It’s not important enough to most people, or to the right people,” or to the people who could help make a change. “When you see people thinking it’s important, then you’ll see the money flow towards it.” Payne told the employee who had posed the question to contact his office, in order to continue the conversation and perhaps find a way to drum up more interest.

In response to a question about the school system, Payne said that he wanted to return it to local control. “The [state government] continues to control the largest [school] budget in the state. The Newark Public Schools budget is larger than the City of Newark’s budget.” He then deferred to Katz, who’s a member of the Newark Educational Success Board, which is charged with transitioning the schools to local control.

One employee wanted to know if the congressman could do something to increase the after-school activities available to Newark high schoolers. The employee added that, when he was younger, there seemed to be many activities for him to join, but now he sees young people on the streets. Payne agreed that this is a problem, and Katz added that the public libraries have a role to play as places where kids should be able to go to after school.