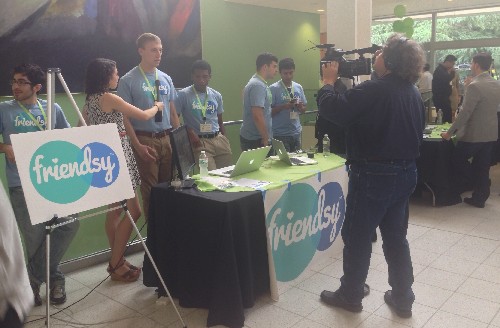 Some of Princeton University’s most ambitious engineers and entrepreneurs presented products and business ideas developed over 10 weeks as part of the school’s Keller Center’s eLab Summer Accelerator Program.

Seven teams of undergraduate and graduate students pitched their products at the eLab Demo Day at the Keller Center on Monday, Aug. 11. This article will cover three of the teams.

The startup accelerator program was established in the summer of 2012 to help Princeton’s students get their ideas off the ground. The teams were provided funding and mentors based on expertise in a given domain or general entrepreneurial experience.

Friendsy is a college-based social network that connects potential friends with each other based on a user’s interest in someone else. The platform is available on the web and on iPhone and Android devices.

Michael Pinsky and Vaidhy Murti from the Friendsy team recounted the moment they met as freshmen while watching a Yankee baseball game in the Princeton student center. “We started talking, we went to a game a few days later, and here we are now: We’re roommates who co-founded a company together. But let’s get real; it doesn’t usually work that way.” Pinsky said.

The creators realized that part of the college experience is meeting new friends. They wanted to create a product that makes it easier for students to meet.

Upon registering for the site, the user is placed in a network with other students at the same school. The user can rate the level of interest they have in meeting other Friendsy users on campus as “friends,” “hookup” or “date.”

If the other person chooses the same category, a notification is sent to each user about their mutual interest. Otherwise, all choices are kept private from one another. “It’s a win-win way of putting yourself out there,” Pinsky said.

After launching at Princeton in May 2013, they registered a quarter of the campus in one week. The site has also expanded to seven other campuses such as Dartmouth, Fordham and Bucknell. Pinsky said the site usually registers between 30 to 50 percent of the campus after 10 days to two weeks after launch. In total, the site has registered 10,000 users and generated 150,000 mutual connections and 17,000 compliments.

Music is Medicine (MIM) is a 501(c)(3) nonprofit that pairs critically ill children with music artists who create original songs for each patient. The creators of MIM identified a problem: Personalized programs that cater to the emotional needs of pediatric patients are not always available or easy to find.

MIM serves as the bridge connecting patients and artists. Hospitals will send referrals to MIM and find an artist to talk with the child over Skype or in person. Songs are professionally recorded for iTunes and YouTube. The music videos have received almost half a million views in total and over 1,200 comments on YouTube. All proceeds are sent back to the hospital for research.

Hope Lorah, COO of MIM, told the story of their first client, Brooke, who was battling bone cancer. MIM connected her with her favorite artist, Drew Seeley, over Skype “That day we saw Brooke excited like any other 13-year-old girl meeting her idol,” Lorah said. Seeley also wrote a song inspired by and written for Brooke and performed for her and her family at the hospital. The song was uploaded to YouTube so she could share it with her friends, and where people could leave supportive comments on the video.

Other organizations exist that bring musicians to children’s hospitals, but do not offer personalized connections, nor do they have a fundraising or awareness component, Lorah said, adding that MIM plans to have 24 songs produced by the end of the year, and 30 more in 2015.

Sign School seeks to make learning American Sign Language (ASL) easy and accessible to anyone with an Internet connection. Co-founder Evan Corden said the idea emerged when he and a friend tried to learn ASL to talk with a deaf student in their dorm. While researching ASL resources, they were surprised to find how primitive many of the websites looked and how old many of the textbooks were.

Corden and some friends decided to start a website that creates a modern curriculum for learners, while using video-based instructions and interactive exercises to test their ASL abilities.

The site is scheduled to launch in the fall with schools such as Princeton, Boston University, Northwestern and many others participating in their pilot program