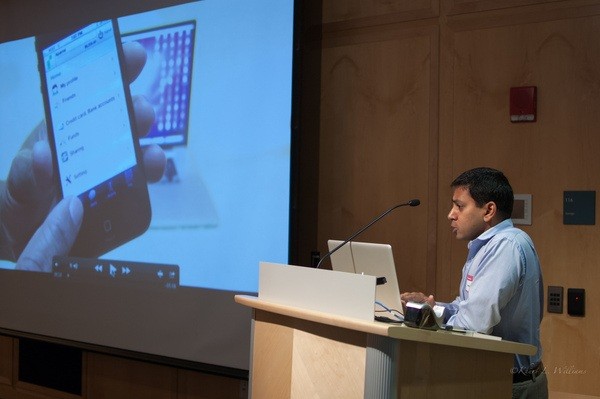 As was previously mentioned in NJTechWeekly.com, August was a big month for the Princeton tech ecosystem. We are continuing to explore this theme.

At the August 20, 2012, Princeton Tech Meetup, three N.J. startups took to the floor to demo their products to a highly enthusiastic group of 155 developers, entrepreneurs, consultants and others. Pre-meeting networking at this event was in high gear as attendees connected with like-minded colleagues over pizza provided by Casabona Ventures.

The meetup, which launched just seven months ago, has reached 712 members and is growing quickly. “We are officially the second largest tech meetup in N.J.,” co-organizer Venu Moola told the group, which meets monthly at the Princeton Public Library community room.

First up at the podium was HootBoard (Robbinsville). According to founder Satyajeet Shahade, HootBoard is “an interactive online bulletin board that lets users communicate with their communities.” It’s not a social network; it’s a community, he added. HootBoard is in private beta, and Shahade said he was seeking the Princeton Tech Meetup crowd’s feedback.

The idea: no more walking across campus or to a town center or grocery store to post fliers, hoping others see them. Users can post items to buy or sell, jobs, event announcements, activity partner requests and so on, on a virtual bulletin board limited to a defined community.

Shahade took some time to explain the difference between a social network and a community and the value proposition for developing a community space. Social networks start at the core with pre-established relationships, beginning with two people and branching out based on whom you know and who knows your friends. Essentially, everyone has only one social network, even though each person may interact with different portions of it on different platforms.

A community, on the other hand, is a group of people who come together based on common interests. Said Shahade, “That’s very different from a social network. People within the community may have some interpersonal relationships, but that’s not the bond that forms [within] the community.” Communities can be nested, and there can be multiple communities within a community, or overlapping communities. One person can be a member of more than one community, he added.

Next up was Payintele (Robbinsville), a payment platform for mobile that is still in beta. Avinash Kuttuva,  founder, gave a demo of the product, which is available for Windows, Mac and Android, with the iOS version coming soon.

Payintele is applicable to a host of situations; it’s not just for paying back buddies but also for use at Starbucks and by merchants, Kuttuva said. “We are introducing something called ‘share,’ ” he noted, comparing the product to an add-on credit card for a child or spouse. “Share does the same thing: it controls access to your funds and shares that with people you trust,” he added. The difference between it and an add-on credit card is “you have control at the touch of a finger, any time you are awake and have your phone with you.” You can monitor where other people are spending money, and deactivate sharing any time you want.

Payintele will also let businesses accept payments via a tablet or an iPhone. They can set up payments in a few minutes, and terminals can be located in multiple places so more than one person can collect payments simultaneously with no special hardware needed.

For security, the app will collect the user’s photo, which will be sent to merchants so they feel confident about accepting payment.

Presenting next were RJay Haluko, creative director, and Patrick Pierson, mobile app developer, at Princeton Junction-based Local Wisdom, producers of Wooble Attack, which we covered when it launched. The developers showed a demo of the app, which is a bit like Whac-A-Mole, using the phone’s swipe feature.

Wooble Attack players receive points and tokens, and tokens are used to obtain bonuses. Standard mode is timed, but those playing for skill can use accomplishments to add time to their totals. Players can earn extra powers, and there are impediments introduced to keep the game interesting. For example, if a bomb is touched, that spoils the score. Users can make in-app purchases to increase their powers as the game becomes harder.

The developers enthusiastically discussed using Unity 3D, a tool that lets programmers develop across platforms. “This allowed us to work in one code base and export to iOS, Android, Mac, PC and Xbox,” Pierson said.

We found out how #COBOL programmers can help our state with its legacy systems.