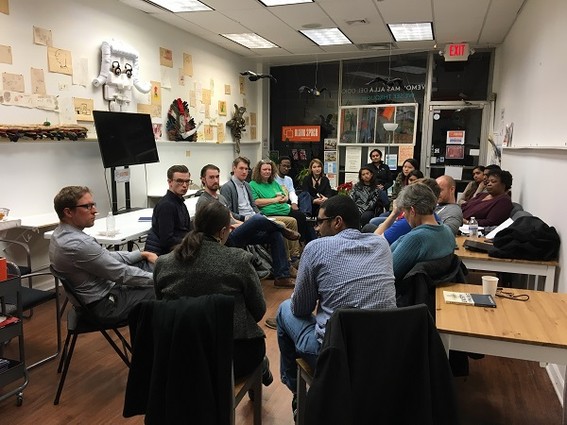 The ethics of UX was the topic of discussion at the Central NJ Design Meetup. | Blank Space Highland Park

The meetup, led by Ben Bakelaar, founder and lead designer of Human Experience Systems (Highland Park), kicked off with an opportunity for introductions to members of this varied group, which included full-time designers and hackers, as well as students in the Master of Business & Science program at Rutgers University.

While many Central NJ Design meetings are presentation-based, this one allowed for plenty of back and forth with the attendees about issues concerning the behavior of businesses in the digital realm. Equifax, Facebook, Amazon, Google, and a handful of other companies made the list during this talk about the past, present and future of design.

Over 20 group members of various backgrounds joined in the conversation, hoping to create or develop a shared understanding of the challenges faced by those in the tech community.

The massive and rapid adoption of a few lucky and leading apps has created a digital business model that is focused on scale, frequent use and data collection. This has led to more and more issues that point to a need for regulating tech addiction, and for ethical guidelines in general. Ethics is about what is considered good and bad by both societies and individuals.

One conversation that night revolved around the gamification of apps. Many businesses focus on adding in addictive qualities into their apps, contributing to dopamine release and increased use by customers. During this discussion, many wondered where the ethical place was to draw the line. How does a designer keep a user interested, while also lessening interference in that user’s mental environment? Digital exposure initially just impacts one’s physical environment. Now it is becoming more and more ingrained in one’s mental environment.

When asked about this question, Bakelaar said, “I was doing some research for the meetup, and while looking at Dieter Rams’ famous principles of good design, the one about being environmentally friendly really jumped out at me. It talks about physical and visual pollution, and, in a sense, we could say that this smartphone era has created massive mental pollution. A decade after the iPhone revolutionized the mobile phone industry and popularized the ‘app,’ we find ourselves adrift in a sea of always-on, attention-demanding apps.”

This example is clear when discussing the social lives of children. Facebook’s new “Messenger Kids” has been marketed as a safer alternative for children interested in interacting with friends and family online, but it has been met with resistance from parents and psychologists, already worried about how kids spend their time. Company researchers know exactly how addictive their apps can be; and now, in a world where it is easier than ever to get those apps in front of the eyes of the younger generation, it is understandable that the issue is followed closely.

Mark Brehaut, founder of Icebrkr (Trenton), a new dating app that “helps you communicate better, choose your best photos and matches you with people who share your values,” commented on the “paradoxical world” that designers find themselves in. “On one hand, the whole reason I create products is to add value to a person’s life. On the other hand, in order to provide value, I need to engage the user in a world of noise. This often means consciously building in mechanisms that may be addictive.”

Beth Ritter-Guth, a programmer at the hackerspace FUBAR Labs (New Brunswick), attended the meetup because she was “interested in how design plays a role in self disclosure,” citing the examples of Facebook quizzes that lead to click bait and phishing. Ritter-Guth added that she was “interested in meeting with designers to learn how they navigate those tricky ethical waters between creating addicts and generating revenue.”

The most important step forward is that those who are behind the scenes of app creation now understand the impact their products can have on both the physical and mental environments of users. Overall, the night served as a positive reminder that, in a world where one is able to intentionally create addicting apps for personal profit, more and more talented designers and programmers are taking the time to think about the effect they be having on the future of technology, even as they continue to use their skills to make exciting applications that they believe in.

The next Central NJ Design Meetup conversation will be held in April on the topic “No More Web? The UX of Chatbots, Voice, and Gesture-Based Interaction.”