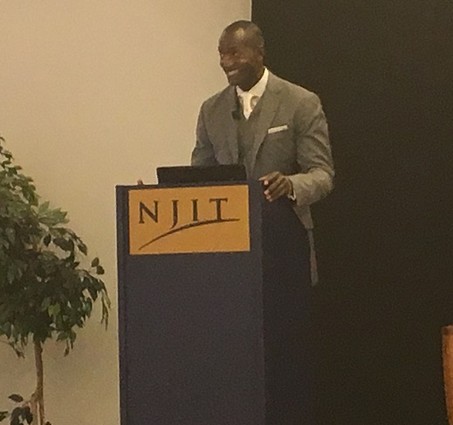 Pinkett is the cofounder, chairman and CEO of BCT Partners, a multimillion-dollar management, technology and policy consulting firm in Newark. His company is located at the Enterprise Development Center.

And what is that? “The innovator’s mindset has a healthy acceptance of failure as the only path to innovation. It’s part and parcel [of innovation]. You can’t have one without the other.”

There are three principles that innovators should know about failure, Pinkett told the audience. The first is that failure says nothing about you. It’s not personal, it’s business. As an example, he noted that he had launched five ventures, four of which failed. “And I’m proud of it,” he said.

The second principle is that you learn more from failure than you do from success. “If you’ve lived long enough, you know this.”

The third principle, said Pinkett, is based on Winston Churchill’s quote that success is nothing more than going from failure to failure with undiminished enthusiasm.

“The connecting dot between failure and success is perseverance,” he noted, pointing to WD-40’s 39 tries before it found the right formula, and to Formula 401’s 400 tries.

Pinkett added that an innovator’s mindset might not always be practical. While startups usually have a culture of willingness to take risks and to ask customers to take risks with a new service or product, more traditional organizations often don’t want to entertain failure.

After talking about a merger that failed, he noted that the companies clearly had cultures that were amenable to risk taking, and that the people involved weren’t afraid of the consequences of failing. “If you remove the consequence, and say ‘it’s okay to fail, you can make a mistake, you are not going to lose your job,’” you’ll begin to unleash people’s innovative capabilities and unleash their potential for innovation, he stated.

Discussing how companies generate innovation, Pinkett mentioned that one way is to buy an innovative company, but he noted that it doesn’t always work out. Sometimes people take too long to fail. The lesson to be learned in this instance is that there’s “no badge of honor for taking a long time to fail.”

We need to create an “environment in our organizations that is predicated on the experience of experimentation, exploration, trial and error, iteration, prototyping, beta versions, minimally viable products and the like,” he said. And when you see that something’s not working, it’s not about scrapping all that effort. It is about failing fast, because the “faster you fail, the faster you pivot and the faster you get to the innovation.”

Pinkett noted that his own company had tried to buy innovation by merging with several companies that looked promising, but seven attempts failed. Finally, the eighth attempt worked, and has been very successful. “While I certainly celebrate the fact that it worked, what I want to impress upon you, the audience, looking through the lens of the innovator’s mindset, is that we had seven failed attempts leading up to that success.”

BCT Partners has implemented a monthly knowledge review, he said. It’s a company-wide activity in which a colleague presents a failed project to the entire organization. Then there’s a discussion about why it failed, so the lessons learned from the failure are not confined to the person or team involved, but can be shared with everyone else in the company. “We do that as a way to instill a culture that is not only accepting of failure, but in many ways is encouraging of failure.”

“Stated more colloquially, after a failure, don’t hate. Celebrate, rejuvenate, motivate, commemorate … but, most importantly, focus on the lessons learned that you can generate.”