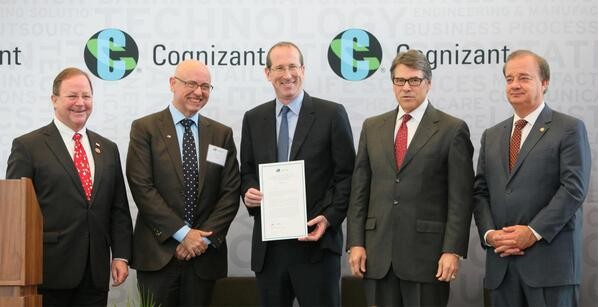 Cognizant tweeted this picture of President Gordon Coburn presenting a check to Texas A & M. | Cognizant on Twitter

Several news outlets are reporting that Cognizant Technology Solutions will be moving its U.S. headquarters out of Teaneck to College Station, Texas, but that world headquarters will remain in New Jersey.

The Fortune 500 company had announced the acquisition of a College Station, Texas-based IT company, SourceNet Solutions, during its second-quarter earnings call.

Bloomberg News has said the IT outsourcing services company plans to hire about 10,000 U.S. workers in the next three years. Currently, Cognizant employs about 29,000 workers in the U.S. The new jobs will be full-time positions in science technology, engineering and math fields (STEM), Bloomberg news reported.

Reuters reported that moving the U.S. headquarters will give the company access to graduates of Texas A&M University, College Station, Texas.

In a press release, Cognizant said it was making a three-year, $150,000 commitment to support university-sponsored STEM education programs at Texas A&M.

The company said this aligns with its goal to further STEM education in the U.S. as part of its Making the Future initiative, which is also having an impact on New Jersey.

Cognizant said the university plans to use the funding to support its BioFORCE program, which is an experiential STEM outreach program of the National Center for Therapeutics Manufacturing (NCTM) at Texas A&M. The summer program provides developmental activities for high-school students to prepare them to become part of the biotechnology and biomanufacturing workforces of the state.

Cognizant President Gordon Coburn was at an event with Gov. Rick Perry to announce the move. CBS News reported that Coburn praised Texas’s business climate and said that 750 of the positions or more would be created in Texas by 2016.

1742 More posts in News category
Recommended for you 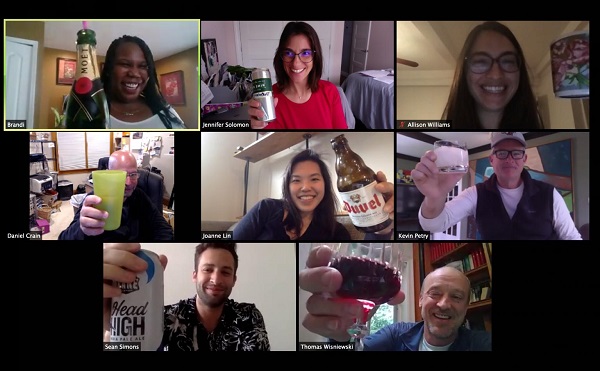 When Newark Venture Partners decided that it wanted to host an NVP Labs accelerator class...

Join us tomorrow for #BreakTheCeiling with Kathryn! The one-on-one interview series celebrates women who have made strides in industries that are still largely dominated by men. See you on IG at 4PM EST with @EqualSpaceCo! #womendisrupttech

NJ Tech Weekly is taking a moment to remember our fallen, this Memorial Day.