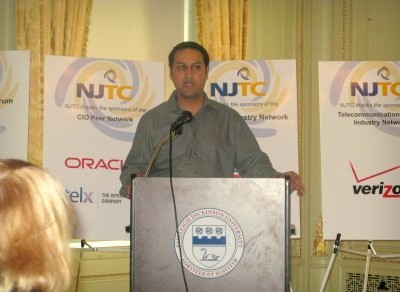 For the past three years NJTechWeekly.com has been interviewing many N.J. tech company executives and founders to learn how the state’s business climate is affecting their firms. Last month we spoke with Maulik Shah, CTO and cofounder of Mantra Information Services (Bridgewater), a custom software development company.

NJTechWeekly.com first encountered Mantra at the NJTC Mobile Apps Forum and Competition that took place at the Fairleigh Dickinson University (FDU) Madison campus in June 2013. At that gathering, Shah presented his award-winning product, a mobile banking application for the iOS and Android platforms. The app lets small and midsize banks — which don’t have the resources to develop their own applications — create custom-designed apps that conform to a financial institution’s branding.

Mantra employs some 30 people, 20 of whom are based in New Jersey. The company made big news this year when it closed its offshore location in India and brought those jobs to the United States — what is known as “reshoring.” “We are putting our faith in ‘made in America,’ ” Shah told us.

Mantra is keeping its business in the U.S. for good reason. The company had been facing retention issues abroad; it’s become a tech industry trend in India that every nine to 12 months, workers migrate to a new job, thereby increasing their pay by 35 percent.

Moreover, Shah found that the time difference between the U.S. and India was impeding productivity. Development was taking longer. He noted, “If something can be done in a day here, it takes about a week overseas just because of the time zone difference and how much overlap you have with your counterparts. The time difference is … 9½ to 10½ hours. When our workday starts, their workday ends.”

The company also found that managing people overseas took more time than doing so in the U.S., adding to overall expenses. That was hindering the company’s ability to be competitive and expand its business.

Following are our questions and Shah’s answers.

Why is Mantra located in New Jersey?

I graduated from FDU’s Teaneck campus in 2000 and worked in New Jersey. This is my home state. So when I wanted to start a company of my own, I started here, along with some of my colleagues at that time. We all lived in New Jersey.

What are some of the pluses of being located in New Jersey?

The concentrated market presents business opportunities for a company like ours. There are financial companies, healthcare companies, engineering firms and others who need software development services. Companies in the northeast region invest heavily in process automation and tend to take advantage of the latest trends in technology to solve their business problems.

Even though New Jersey has an above-average unemployment rate, there is still a shortage of skilled labor. The overall cost of living in New Jersey drives wages higher than the national average. On top of that, we compete with companies in New York City that pay high wages. There is a lack of support from state government for small businesses like ours. The overall climate in New Jersey is not very favorable for [a] business like ours. We are seeing that many companies like ours are now migrating to business-friendly states in [the] southern and western regions.

If you were to speak with Gov. Christie or anyone else in power about what they could do to keep businesses here, what would you say?

New Jersey needs better programs for local small businesses and startups as well as for attracting businesses to move here. Startups and small businesses like ours can help foster the state’s economic growth. Since New Jersey attracts a very high number of international students, it should support immigration reform that makes it easier for these students to get … work visas, as that will help [offset the] shortage of skilled labor. New Jersey has one of the highest unemployment rates in the country. The state gets the lowest rankings of the most business-friendly states. I am not sure if we have missed the boat … I want to remain hopeful that Gov. Christie will introduce reforms to change this.

Have you ever taken advantage of any of the programs offered by the New Jersey Economic Development Authority?

We investigated them several years ago and didn’t apply because they were very cumbersome. Also, at that time they were only offering $35,000 business loans, which would hardly cover the six-month salary for a software programmer.

What do you think of New Jersey’s colleges and universities?

The colleges and universities in New Jersey are usually quick in adapting current business trends as part of their programs. These programs help prepare the workforce for tomorrow.

We have partnered with NJIT, Stevens, FDU, Rutgers and local community colleges for providing internships to students as well as hiring recent graduates.

How are Mantra’s reshoring efforts working out?

The reshoring decision has allowed us to shift our focus to the frontline of our business [rather] than managing remote teams. With our reshoring initiative we have slashed operating expenses and greatly increased productivity. This is largely due to increased efficiency and reduced management overhead, thanks to everyone being local and not being blocked by language and cultural barriers.

Many companies, whether in manufacturing or the IT industry, have started hiring locally, making reshoring [more] a norm than a growing trend. We are able to partner with the clients who prefer working with a local team. We are experiencing rapid growth within just a few months after reshoring. There is definitely a struggle for us in finding quality developers locally to fill our open job positions, but we are hopeful to fill our remaining openings in the next few months.

Previous: Hoboken Explores Smart-Grid Technology to Keep Lights On in Extreme Storms
Next: NJ's Online PARCC Rollout Goes Off Without a Hitch