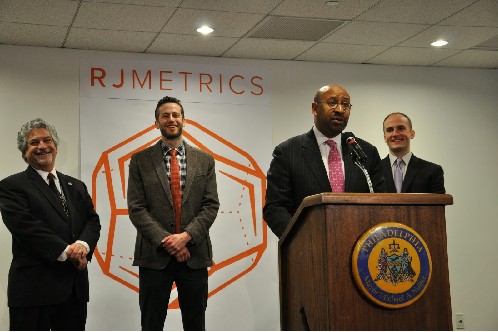 Whether, as Mayor Michael Nutter said on Tuesday [Feb.18, 2014] at the opening of RJMetrics’ new offices, that its an example of a company that can “start in Philly, grow in Philly and stay in Philly,” I’m not completely sure, because the startup had its first offices in Camden [Ed note: Waterfront Technology Center; moved to Philly in 2012] after originally working out of co-founder Robert Moore’s home, which I think was in Jersey at the time if I remember correctly. But that’s just a minor technicality.

But another impressive fact about RJMetrics, co-founded by Princeton grad Moore and Penn grad Jake Stein, was that it was basically bootstrapped from its founding in 2009 until receiving some seed funding in 2012, then getting a 6.25 million Series A round led by Trinity Ventures in 2013. (Trinity, by the way, just lead an $8 million round in Hoopla Software, which has development offices in West Chester.)

RJMetrics has grown from 26 to 46 employees since May 2013, and plans to nearly double that staff this year. This growth necessitated more space, and thus the move from The Philadelphia Building to The Widener Building at One South Penn Square.

RJMetrics has become a star in the business intelligence space, specifically in helping
companies doing business over the web analyze the data coming out of their operational websites. Its SaaS software is said to be easy and not too expensive to get started up on. It says it now has more than 250 clients.

The event was held not only to highlight RJMetrics’ success, but the progress of the entrepreneurial community in Philadelphia, for which RJMetrics has been both a key example and a visible leader.

Reposted and slightly edited with permission of PhillyTechNews. The original post appears here.