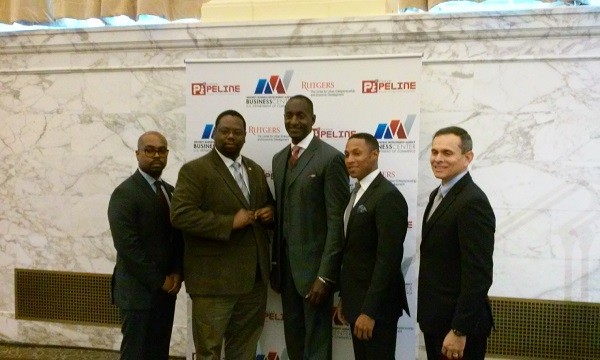 On December 6, , the Rutger’s Center for Urban Enterprise & Entrepreneurship (CUEED) hosted a conference launching the Pipeline to Inclusive Innovation (PII). During the event, panelists and speakers discussed how to find, apply for and get awards for SBIR (Small Business and Innovation Research) and STTR (Small Business Technology Transfer) grants.  Approximately 150 people attended.

The theme of the conference was finding ways to support minorities as they apply for and get these grants. There were two panel discussions, one talking about minority awards for grants and the other about the Minority Business Development Agency’s role in SBIR and STTR grants.

Robinson began his panel tying in several business facts, like how innovation, entrepreneurship and diversity require access to capital, and 90 percent of innovation comes from small business.

Castillo said that every year, the U.S. government awards $3 billion in grants for research, both basic and futuristic. The funding comes through NASA, the National Science Foundation, the Department of Defense, the National Institute of Standards and Technology, the National Institutes of Health, and the U.S. Department of Agriculture. The government needs small businesses to do this research because the commercialization of research and development is the government’s return on investment, Castillo said. The government needs small businesses to commercialize R&D or there will be no return on investment on R&D.

Robinson, in collaboration with a cohort from the University of Alabama, recently completed a study on the subject, which he explained. He said that only 7 percent of the grants issued by the government go to minorities and only 10 percent to women. There is a need to include more minorities and women in STEM, he said.

Diversity owned businesses are twice as likely to export, he said, as they often have foreign contacts and language skills. He added that many technology customers are outside the U.S. and the government wants to see the U.S. export technology.

The CUEED PII will help minority- and women-owned businesses get SBIR and STTR grants by archiving videos of CUEED PII conferences and providing webinars and mentoring, he said. In addition, the CUEED PII will help engineers, who might not be the best people to write business plans, commercialize products with training and technical assistance.  Information about opportunities will be posted to the CUEED PII website.

Castillo said that innovation is not just apps. It’s water, construction materials, agriculture, artificial intelligence, Internet of Things and more. There is $3 billion in grants available every year. Grantees can use government research facilities and labs, just as large companies do.

So, “why not small businesses?” she asked.

Applying for and receiving awards, as well as selling to the government, is a long process with several levels and phases. There are 10 Technical Readiness Levels, from idea to commercialization. Phase I is testing the feasibility of the project. One must develop a hypothesis and validate it, present a proposal, then, a tactical timeline.  However, upon reaching Phase III, once the product is developed, the agency will buy back the product from the business. At that stage, there is no competition.

Also, it was noted that many innovators may not have the qualifications on their own to receive a grant. But, by assembling a team that includes those with the necessary qualifications, one can successfully apply for a grant.

Ramsey said that small businesses have made a huge contribution to the NASA space program by developing risky projects that large corporations would not.

The MDBA representative said that while that agency provides assistance in securing contracts, it does not have capital to lend.  However, it does provide access to contracts and contract managers. Talking to the program will give “color to your solution,” the representative said, which you may find appearing at a later date as an RFP.  If you have letters of intent to buy a commercialized product, this will help secure an award.

The DoD, DOE, DHHS, NASA and NSF all support SBIR and STTR.  Each agency puts out its own announcements and lists requests for development on their respective websites.  Also, one can search www.grants.gov to find grants relating to your business, the representative said.