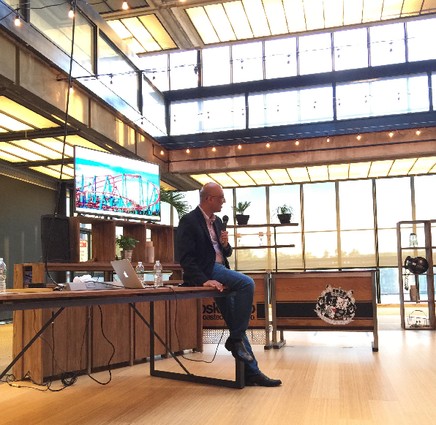 The Holmdel Idea Summit (THIS), which will take place this Thursday at Bell Works (Holmdel), promises to expose its audience to a mixture of past, present and future innovations. The conference is designed to reconnect New Jersey with its tradition of innovation and to spur the state on to future creativity.

THIS is the  idea of Sanjay Macwan, who is deeply engaged in New Jersey’s startup and venture capital ecosystem and led NBCUniversal Media Labs. Macwan, previously led emerging technology innovations at AT&T Labs. Macwan got his inspiration for THIS from the Aspen Ideas Festival, which attracts big thinkers and combines experiences with new ideas.

The summit’s announcement nicely sums up its mission. “We are a group of passionate entrepreneurs, scientists, and engineers inspired by the rich history of innovations and ongoing pursuit of next big ideas right here in New Jersey. We are on a mission to create and nurture THIS (The Holmdel Idea Summit) platform to inspire next generation innovators.

“THIS  is an annual gathering (pilgrimage) of results-oriented innovators and thought leaders from diverse fields (business, technology, academia etc.) to discuss ideas and demonstrate innovations to promote a culture of innovation locally, nationally, and globally, to be a deliberate bridge between accomplished and next generation of passionate innovators and change agents, to enable rich experiences for the participants by incorporating rich local innovation history, current pursuit of next big ideas, local creativity, and outdoors.”

Macwan is excited and optimistic about the prospects of New Jersey’s reaching back into its roots and re-energizing its creative ecosystem. “I wanted to create an event that celebrates what’s happening today and inspires the next generation of innovation around the globe,” he said in an interview.

“New Jersey has such a rich history of invention. The foundations of so many things have come out of New Jersey,” he said. “This is my home, and I feel that in the last decade we’ve lost some of our luster.”

There is nonetheless a broad range of talent in the state, according to Macwan. “I feel that there is talent here from diverse fields besides technology,” enough talent so that ideas can be cross-pollinated and begin to flourish.

For instance, the state has a rich artistic heritage, he noted, especially in the Holmdel region. Jon Bon Jovi lives in Middletown. Bruce Springsteen is in Freehold. “Iconic musicians have come from here.” In addition to the artistic talent in the area, there is pharmaceutical talent and financial talent. “We should be able to get together and create an event like THIS that becomes a pilgrimage for people of serious thought to push new ideas forward.”

Macwan continued, “We are going back to the roots of Bell Labs, and we are already seeing that the next generation of innovation is being pushed out of that ecosystem.”  As an example, he pointed out that a division of  NVIDIA located at Bell Works is doing some exciting work in machine learning and automated cars.

One of the speakers at the summit, Larry Jackel, autonomous driving consultant at NVIDIA, will explain deep learning and its practical applications, including the autonomous-driving work done by NVIDIA at Bell Works, which harks back to the early advances in machine learning made in the same building during the late 1980s. “That very same group is doing the work for NVIDIA on self-driving cars,” Macwan said.

The keynote speaker at the summit will be Alan Masarek, CEO of Vonage (Holmdel), who will talk about innovation in New Jersey, past and future. Markus Hofmann, executive vice president of Nokia Bell Labs, will present an innovation forecast.

A student from one of Monmouth County’s best high schools, Biotechnology High School (Freehold), will be talking about “Claytronics,” a future technology that will use programming to change matter into tiny computers that can reassemble themselves to replicate objects. This is just a theory now, but exposing attendees to future concepts such as this one is a goal of the conference.

“I want to engage high school students,” and encourage young minds to be innovative, Macwan said. “We want this platform to be a bridge between accomplished innovators” and new ones.

To make the event more experiential, Chris Pfaff, another ex-Bell Labs employee, who was a comedian in a former life and now is CEO of Chris Pfaff Tech/Media (Upper Montclair), will connect technology and comedy.

Developing the summit would not have been possible without support from Vonage, Bell Works and a group of passionate volunteers, Macwan said.  NJTechWeekly.com readers are invited to attend THIS. Act quickly because there are only ten slots left.