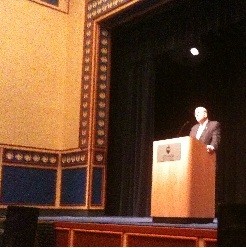 He presented a pessimistic picture of America’s ability to boost its educational system in science and technology subjects, bolster its science and research underpinnings, and develop a job engine that will create jobs here at home and not abroad.

Near the end of the speech, he said, people often ask him if he is a pessimist or a populist. He replies with an old saying: A pessimist is a person who wants to be an optimist but has a grasp of the facts.

On the bright side, he said, Winston Churchill once said, “You could always count on the Americans to do the right thing– after they have tried everything else.”

Augustine is particularly pessimistic about America’s ability to compete for jobs. The job is the basis for our standard of living and quality of life. It’s important to the government because the tax base is dependent on citizens having those jobs, he said. National security and social security are therefore dependent on jobs.

“We may be entering a period of sustained structural unemployment in this country,” he said, particularly “real” unemployment, that doesn’t include people who are underemployed or have given up looking.

“In the 21st Century, we’ve moved into a new world, propelled in a large part by science and technology,” Augustine told the group. Globalization has been brought about by two advancements in science and technology. The first was the advent of the jet aircraft, which can bring things around the word at nearly the speed of sound, and the second, the information revolution which has made it possible to move knowledge, ideas and data globally.

In manufacturing, he noted, just one product such as an electric toothbrush can have its electrical/mechanical design performed in Germany and Japan, the motor from China, the brush head from Ohio, the plastic from Georgia and the assembly in Mexico.

Many of these neighbors are highly motivated, well educated, he pointed out. CT scans taken at many hospitals in the U.S. are read by physicians in Australia or India. Today you can hire eight engineers in India for roughly the cost of one here.

He noted that as less developed countries prosper, their costs too will rise, but this will take decades, considering the huge labor pool they are still developing. These circumstances contributed to the disappearance of a third of all U.S. manufacturing jobs since the year 2000, he said.

The “Rising Above the Gathering Storm” report, which Augustine helped develop, concluded that the only way to solve this problem is by promoting innovation. Innovation takes new knowledge from world-class research and brings it into products and services for leading-edge engineering. Then, those engineers turn those ideas into items in the marketplace through extraordinary entrepreneurship, he said.

The bottom line: The US must optimize its knowledge base, he said.

The Gathering Storm report didn’t focus on jobs, he noted, but data shows that science and engineering creates jobs for the other 95 percent of our citizens. Other nations, such as China, haven’t overlooked this proposition. While 18 of the top 25 universities are in the US, “the problem is that it has become ever more apparent that we are living off past investments,” he said.

Augustine decried the situation state-affiliated universities find themselves in today. As state tax revenues decline, our great public research institutions are threatened, in a way that once that seemed unimaginable, he said, adding, “Our great state universities are being privatized. State funding is lowest in a quarter of a century.”

“If a developed nation is going to create jobs for its citizens, it is clear that it is going to have to have a world-class educational system,” Augustine said. However, only 16% of baccalaureate degrees are awarded for science and engineering. “We used to be first at this,” he noted.

And the public school system is worse. While America has some truly outstanding public schools, teachers and students, we rank near the bottom of schools internationally, he pointed out, quoting a number of statistics to back up his assertion. And he said, spending has increased by 140% and staffing has also increased but scores remain unchanged.

Yet, requirements for higher education graduates in the workforce continue to increase. The demand for people with a high school education is declining.

Shockingly, there is a strong case that the engineering infrastructure in the US would have collapsed if foreign individuals hadn’t come to the US to study and elected to stay here. That’s in spite of our immigration laws that make them go back home after they get their degrees.

One might argue that innovation should be paid for by the nation’s industrial complex, he said, but there isn’t much chance of that now. In one survey, he said, CFOs of computer companies have said that they’d be willing to forego research all together in order to reach next year’s profitability projections. “That’s not the formula for long term success,” he continued.

Market forces are causing US multinationals to create offshore jobs, shutting down more jobs within our country. Prosperous US companies have research labs, engineering facilities, customers and jobs off shore.

At last, in a bit of optimism, Augustine concluded that we can do something about this. He suggested that the audience look at and advocate for the 20 points presented in the Gathering Storm report.