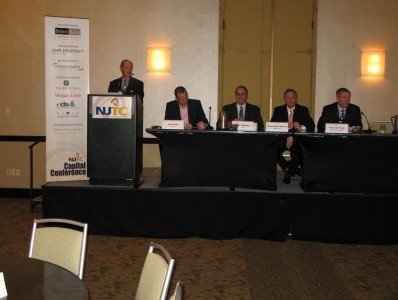 The discussion, moderated by Philip Politziner, chairman emeritus of consulting and accounting firm EisnerAmper (New York), focused on past successful capital-raising strategies. Panelists pulled no punches about what they had had to do to keep their companies afloat.

John Eley, CEO of Pivot, a Jersey City company that makes instant-messaging infrastructure for financial trading, made an exit in August 2012. Before Pivot, he was with Hotspot FX, which was later acquired by Knight Capital.

Eley told the entrepreneurs in attendance that the No. 1 job of a CEO is to make sure there is money to meet payroll, and that he himself sometimes made payroll by the skin of his teeth.

He told his audience to beware of “friends and family” rounds. “I’ve raised money from friends and family … and I’ve had it go well and not so well. I have to tell you, it is more fun when it goes well. You are going to Thanksgiving dinner, and you … have to look someone in the eye and explain … that the $25,000 or $50,000 you expected to turn into $100 million is now at zero. It really takes the stuffing out of you,” he joked.

Advising entrepreneurs to beware of inbound calls from venture capital (VC) firms, Eley noted that those firms often behave like headhunters: “I always like to hear from headhunters, because they tell me how good and talented I am.” Similarly, some VC firms will use deal generation teams to call and check in with startups with traction. While flattering, they are a big waste of time, said Eley: “Unless you are squarely in the bull’s-eye of what they invest in, it’s clearly not a good use of your time to burn a lot of energy on this.”

Christopher Kuenne, chairman and CEO of Princeton-based Rosetta Group, a digital agency that made a successful exit for $575 million in 2011, told the entrepreneurs to be prepared for scary times. He described how Rosetta, which had started as part of another agency’s holding company, was bought out from that company.

“One of the most terrifying experiences of my life was sitting … at a law firm [with his wife, his partner and his partner’s wife] literally signing away every single thing we owned” to borrow $2.7 million to buy the company.

Later, said Kuenne, after anther raise and after the company had grown, “we realized we were ready for a private equity raise.” They asked their trusted advisers, Brown Brothers Harriman (New York) and the precursor to EisnerAmper — Amper, Politziner & Mattia — to help them put together a presentation to pitch Rosetta’s growth story.

“At every one of the 11 that made offers … you could see there was a CEO on their board who really wanted his job back or, more precisely, wanted my job. I didn’t want him to have my job; I just wanted his money.”

Rosetta was eventually able to find a private equity firm, Lindsay Goldberg, that was a “phenomenal partner.”

Kuenne told the entrepreneurs to have a “very tight strategy” for what business to be in and to run their company, from the beginning, like a public one. “That financial focus, that financial discipline, really proved to be a major benefit as we told our story to prospective investors.”

A second key lesson, said Kuenne, is to hire the smartest people you can. “In fact, hire above the job.” And if you are creating wealth, “it’s important to share the wealth.” One investor told him the reason his firm had lent Rosetta the money was “you had such an incredibly strong management team, and the team was tied into the company through an incentive plan. If they were to leave, they would leave millions on the table.”

Kenneth Traub, now of Ethos Management, had cofounded Voxware (Hamilton) then a pioneer in Voice over Internet Protocol (VoIP), which now exists in a different form. He said he had gotten involved with Voxware through his desire to help an engineer friend create a standard for audio on the Internet. “This was in 1994, before most people were thinking about this,” he noted.

While working his day job at Trans-Resources, Traub successfully raised $500,000 for the new company, but that wasn’t enough. When he tried to raise an additional $2.5 million, he learned that “if you want to raise money from other people, no one is going to part with their money if you are not committed to” the startup full-time.

The startup was able to secure Intel as a backer, but to make the product a standard, the founders needed the support of the two most active companies in the Internet space at that time: Microsoft and Netscape. Unfortunately, both wanted an exclusive. Traub had to choose one, and he decided on Netscape. The company exited in 1996 with an IPO “with $1.6 million in revenue but great promise.”

Right after the IPO, Traub saw that the landscape had become more complicated: “I saw that Microsoft was determined to crush our business and Netscape as well.”

His first day on the job, Traub noticed irregularities in the publicly filed financial statements. The result: numerous regulatory investigations. He left the company immediately, only to be wooed back to turn it around. After replacing the board, which had been loyal to the CEO, and then replacing the CEO, Traub managed to keep the business afloat.

“We figured out what financial assets could be sold, and we sold them as quickly as we could. We implemented a furlough on production and lived on inventory for a period of time, until we could find other sources of capital. I went out to asset-based financers and repaid” a portion of the company’s debt.

“The most critical reason we were able to keep the company alive and … rebuild it is that I found a strategic partner that had a vested interest in our survival. I reached out and had them make an equity investment and [I] implemented a strategic partnership.”

Traub’s advice to entrepreneurs: “The most important element of raising capital … is trust.” Entrepreneurs should know how to earn trust from all their decisions, he said.

Traub offered concluding advice: “When you are raising capital, find a way to align your business and the objectives of your company with the vision of your investors.”