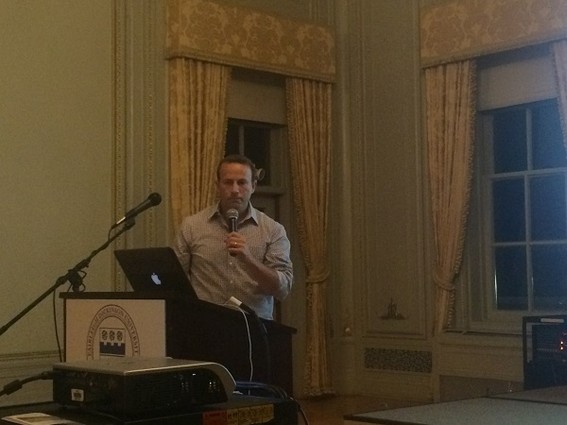 Just before its Sept. 9 meeting, the Morris Tech Meetup achieved a milestone, having gained its 1,000th member.

The group had also outgrown its usual home, in the Orangerie at the Fairleigh Dickinson University Library and had moved to the “Mansion,” across campus, for this meetup at least.

The main speaker for the evening was serial entrepreneur Seth Tropper, who compared and contrasted his two startups, PlasmaSol and Switch2Health (S2H), both of which  had successful exits.

Before Tropper spoke, Nabil Mouline, the president and director of  ChathamSTEM  soon to be JerseySTEM, discussed his organization, which sponsors community-based science, technology and math programming and advocates for STEM in the K-to-12 curriculum.

Also pitching was Kevin Granville, founder and CEO of Cracked Innovations, a Pennsylvania startup. Granville presented the “WhatNow” app, which is trying to put the “social” back into social media by creating a set of tools to bring people together in face-to-face situations. WhatNow is well-funded, and Granville’s team has employed teams of developers and graphic designers to create it.

Tropper, who now works for Yahoo Labs, previously had tech and business consulting jobs at IBM and AT&T, and spent six years building each of his two companies from concept to commercialization to exit.

PlasmaSol, which focused on medical device sterilization and air sterilization, received $2.5 million in equity financing during its journey and another $7 million in R&D funding “from various state and federal agencies.” It exited in a sale to Stryker (Kalamazoo, Mich.). At the time there were eight employees.

S2H, which made a wellness platform with an activity tracker that was well ahead of its time, had received investments of $800,000 and $300,000 in R&D funding by the time it exited.

S2H’s strengths were in its intellectual property, and Tropper eventually sold its IP to Fitbit. At the time of exit, S2H had between four and eight employees, said Tropper. “We were generating revenue and we had developed a very interesting patent portfolio.”

PlasmaSol came out of Stevens Institute of Technology. Tropper explained that he was in a program at that school, and that at the end of the program he and some of his classmates had a chance to do some research into plasma technology. “We spent the better part of a summer looking at the technology,” and followed up by licensing it.

“We spend about a year and a half, nights and weekends, trying to develop the technology and figure out its application. This was very early stage technology, and we had to identify applications for it.” When an angel investor came into the mix, the team quit their day jobs and never looked back, Tropper said.

Early on, the company focused on the environmental remediation market, but then transitioned to homeland defense applications.

“We kind of became a de facto government contractor,” but that’s not where the startup’s exit came from. PlasmaSol’s sale came from the sterilization part of the business. Unlike typical instrument sterilization technology, “our solution was portable; we could produce the technology in modules,” Tropper said.

S2H, on the other hand, started out as a consumer play, but the startup kept the  corporate option in mind. Its mission was to improve health by integrating products with a proprietary social-based wellness platform to motivate, educate and reward employees for physical activity. In 2010 the company launched the consumer platform and in 2011 a beta version of the corporate platform. Both of these were well received.

Consumers logged more than a million hours of physical activity and Fortune 500 companies came on board as early customers of the corporate platform. “This was really early in the fitness tracking and wearables space, so we had lots of media attention, which did help us sell the product,” Tropper said. The best thing about it was that people lost weight and would spread the word to their colleagues, he added.

Both companies had interesting exits. PlasmaSol began working with Stryker on a joint development program, which turned out to be very successful, according to Tropper. So the two companies began conversations about how they could work together more in the future. That led to a discussion of an acquisition and, after due diligence, Stryker acquired the business.

For S2H, a lot of key players were coming into the space, so there was much more competition. “It would have required significant investments on our part to compete in the marketplace, so we made a decision to invest in our intellectual property,” and exit through that avenue.

“We had a pretty robust patent portfolio, so we … put some more money into enhancing it. We looked at U.S. firms and we had about a dozen or so companies express interest” in acquiring the company.

When it came to the exit, Fitbit wasn’t buying the company for its traction in the marketplace or its successful customer list. It just wanted the IP, Tropper noted.

Both startups had leveraged government grants in one way or another to get them started and move along their research, Tropper pointed out, and he suggested the entrepreneurs in the audience with early-stage technology startups consider doing the same. “It may not work well for all companies, but it worked well for us. … It allowed us to learn about the technology in the market, verify the market, and do so at favorable terms.”

He also pointed out that universities have a lot of assets that can be leveraged by startups, if they know how to find and use them. “PlasmaSol came out of Stevens, and we lived there essentially for five years. We engaged countless faculty and countless students from various departments. … In S2H I can probably count five different collaborations with different universities.” NJIT had a student work with S2H to help develop the platform, and Rutgers did some market research that was invaluable, he said.

After closing his talk with some tips for entrepreneurs, Tropper encouraged meetup members to contact him. Earlier in the evening he had told the group that he is an active member of the N.J. tech community, having supported and mentored startup companies for TechLaunch and the New Jersey Economic Development Authority (EDA).

Returning to that theme, he said, “I’m excited by the New Jersey tech entrepreneurial community and hope to see it thrive.”