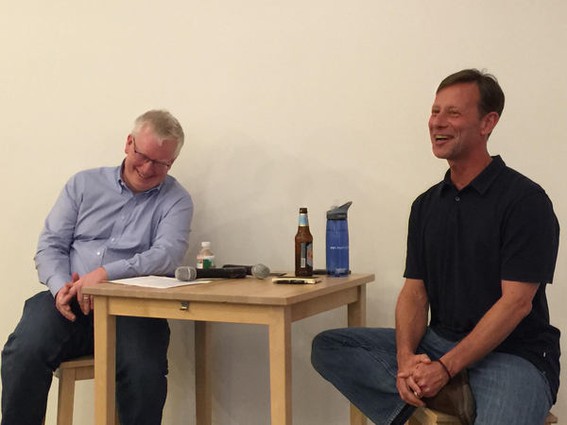 Peter Muller, founder and CEO of PDT Partners  (New York), spoke to a receptive audience at the Startup Grind Princeton meeting, at Tigerlabs on June 18.

Muller advised his listeners to align the utility of their products with incentives for stakeholders, and he emphasized the importance of “following the energy” in both their professional and personal lives.

An incorrect alignment of utility with incentives is one of the primary reasons why startups are rejected by venture capitalists and potential acquirers, Muller told the group.

Muller noted that while employed at Morgan Stanley (which created the technology platform that would later inspire the founding of PDT), his team struggled to incentivize their colleagues to use their product.

Since the company’s standard process was already doing well, the “guy who ran the trading desk didn’t have an incentive to do trades on our platform,” said Muller. Morgan Stanley was using computers by that time (the early ‘90s), but its more traditional trading process was not driven by algorithms.

The challenges his team faced at Morgan Stanley would serve as a catalyst for spinning out PDT, and would serve as a constant reminder to Muller of the need to incentivize not only the customer, but every stakeholder that encounters the product or service. By this time, he knew that the right incentives for employees, investors and customers would all be different, but equally important.

Muller acknowledged that going with his gut, often spontaneously and contrary to  conventional wisdom, is a practice that had defined most of his life.

For example, he once put off a major job offer to spend six weeks in Hawaii, not knowing if the offer would be there when he returned. After establishing PDT, he stepped away from the company for five years. In hindsight, he realized that the company was no longer innovating because they had stopped hiring the right types of people.

He eventually returned to PDT, because — something all entrepreneurs can identify with — it was his “baby.”

“Acting on energy in life is important,” he said. As an entrepreneur, “you have to be obsessed, but it is important to take breaks.”

Muller also said that it was important to be a good negotiator. His team wanted to stay at Morgan Stanley because they were comfortable there, and “made their own rules.” In order to justify the risk of quitting the company to create PDT from scratch, the team figured out how much money they could make by leaving. “We brought that number to Morgan Stanley,” he said. When the company declined their offer, they left to establish their startup. One of Muller’s fears during the early days of PDT was that the contagious energy that had defined the office environment at Morgan Stanley would be gone, adversely affecting the growth and momentum of the startup. Fortunately, Muller said, that never happened.

On the topic of risk, he drew from the famous life coach Tony Robbins. The key is to find a balance between being content and stable and exploring “newness,” said Mullens. “Risk should be scary, but not terrifying.”

As a result of adhering to this philosophy, Muller concluded, he had “broken very few bones” in his life.

Previous: Jersey City receives $1 million investment for job training from JPMorgan Chase
Next: NYSE Insists It Was Not Victim of a Hack, but Questions Remain