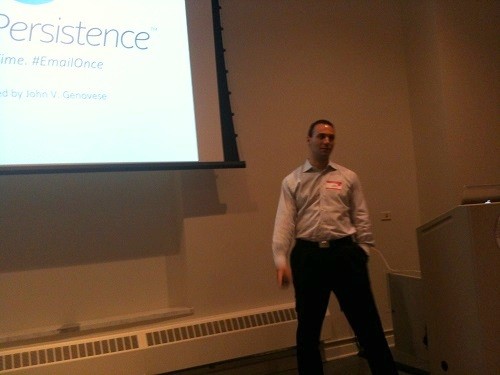 The product — currently set to roll out for Chrome and possibly Firefox — has interesting features. Users can compose the initial email and all follow-up emails from the same compose screen. An auto turn-off feature turns off all follow-up emails after a recipient replies to PolitePersistence. It accepts templates and keeps them organized. The Genoveses envision it being used in email campaigns by both charities and sales professionals. The company believes users will see increased responses because the sender is constantly on a contact’s radar.

The startup initiated a crowdfunding campaign on Indiegogo on September 23, 2013, to raise funds for development and technical costs. A limited number of PolitePersistence licenses will be issued via the Indiegogo campaign. Assuming the campaign is a success, the finalized app is set to be in users’ hands by December 2013.

Sheep Guru: Launched in March 2013, Sheep Guru is a historical product price-tracking service that follows prices so shoppers can get the best deals. The Red Bank-based startup is now moving into the business-to-business (B2B) market with reporting products that help companies track their prices compared with those of their competitors. Sheep Guru says the reports will help retailers develop better pricing strategies.

The site tracks 20 merchants, updating prices daily and sometimes more frequently for certain hot products. A price value indicator assigns a value to the current price, telling users how good that price really is. Price drop alerts tell consumers when products go on sale, and a price history tracker helps them determine the best time to make purchases. The site provides links to the websites where users can buy the products.

Husband-and-wife team John and Katherine  Quinn founded the startup. John, a software engineer who specializes in data mining and data analysis, does the heavy technical lifting; Katherine is involved in the PR, marketing and business development end of the business. “We came up with Sheep Guru because we wanted something that was user-friendly, unlike most of the other comparison sites,” Katherine said. A blog post on the company website provides more details on how the idea for the site developed.

John said the startup is planning to branch out into the B2B world of medical devices, to provide hospitals and healthcare advisers detailed statistical and cost-benefit analysis for items such as MRI machines, hospital beds and X-ray machines. He predicted increased demand for price-analysis services due to the Affordable Care Act, which requires that accountable care organizations reduce their costs if they are to be reimbursed by Medicare.

Phroogal: Startup Phroogal is also running an Indiegogo campaign. Jason Vutig, Phroogal’s cofounder, is that rare breed of startup founder. Vitug moved from Silicon Valley to Jersey City, New Jersey to start his business instead of moving from the east coast to Silicon Valley. He worked in the financial services industry for 10 years, most recently as VP of business development for a Silicon Valley-based credit union. He describes his startup as a way to make financial tools and learning easier because they are indexed, aggregated and peer-reviewed, not search engine-ranked, advertised or socially hyped. Phroogal is expected to offer advice based on individual milestones and goals. The company says it has a working prototype and is currently writing the algorithms for a user beta version, to be released in fall 2013.

Innosolutions: Innosolutions (Neptune), a startup founded by Damon Mason, says it is the “first full-service intangible asset brokerage in the U.S.” Mason said, “We broker intellectual property, high-quality domain names and mobile apps on a risk-free contingency fee, commission-only basis.” Connecting buyers to sellers, the firm helps the latter recover the actual monetary value or more of their intangible assets through licensing or sales acquisitions. The company touts its ability to deliver increased traffic to businesses and organizations, enhancing the value of their asset portfolios.

inControl Ads: inControl Ads (Morristown) now has a beta site up and running, COO Marc Baskin told Morris Tech Meetup this week, where you can give the company feedback on what it is doing right and wrong. InControl has been pitching its personalized ad server, which lets viewers see ads from sponsors they have chosen across multiple screens. Users can now try out its adMatcher feature, which lets viewers select among possible ads. The idea behind inControl Ads, says the company, is to put consumers in the driver’s seat by letting them select which ads they are served.