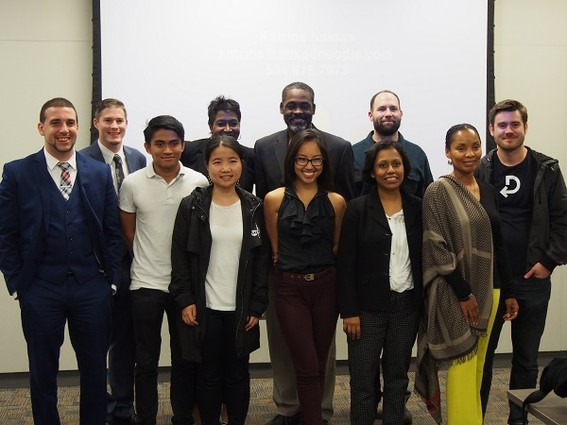 Group photo of some of the founders at the Camden Catalyst pitch competition. | Joshua Schneider

Over 40 startups gathered at 200 Federal Street in Camden on the morning of Saturday, October 14.

They came to participate in the Camden Catalyst startup pitch competition, hosted by Waterfront Ventures (Camden). The competition, which awarded $25,000 to the winning startup, was a two-day event focused on attracting new startups to the city of Camden.

Saturday began with all 44 startups giving 90-second elevator-style pitches of their concepts. Based on these pitches, 16 startups were chosen to give short presentations on their companies. After a break for lunch, eight startups were selected for the semifinal round, during which they each gave a 10-minute pitch presentation and had three minutes of Q&A with the panel of judges.

Many of the 44 contestants were tech startups looking to bring a positive change to the Camden area, including several of the semifinalists. The eight semifinalists were as follows:

ENGAGEathon wants to provide a revolutionary new way for schools and community organizations to boost student and youth extracurricular activities. The ENGAGEathon concept is a Web platform and phone app that tracks student involvement. With an emphasis on cultural exposure and community engagement, the app will feature a leaderboard to incentivize youth participation, customizable features that allow organizations to cater the platform to their needs, and a virtual resume for the students that is automatically updated with completed engagement activities.

Invincible City Farms (Camden) is a startup set into motion by Camden native Fredric A. Byarm. As Fred told the judges, “In America, we feed the most vulnerable populations absolutely non-nutritious food on a regular basis.” Invincible City Farms aims to redress this situation, in which one in five children in the U.S. faces food insecurity, by changing how we farm produce. With acres of urban farmland and a distribution chain that ends with local corner grocers, Invincible City Farms looks to bring 100 jobs to the Camden and eliminate the city’s image as a food desert.

Linked Noodle, based in Brooklyn, but with Marlton roots, has already fundraised over $200,000 for its Web-based teacher/learner connection platform. “Linked Noodle is our answer to that vague Google search,” Katrina Naidas, Linked Noodle founder, told the room.

Linked Noodle provides a platform for freelance tutors to upload their portfolios, manage bookings, and reach prospective clients in their local areas. Vice versa, students can join the site to learn a variety of skills, such as computer coding or playing the piano. Linked Noodle sees Craigslist as its only real competitor in the market, and finds the site lackluster and lacking in services. The startup has already acquired over 200 preregistered users, and is looking to build its team of freelance tutors for a launch.

Other semifinalists included: Tribes, a Web platform that believes in crowdfunding to help those who cannot afford their medical bills; Higher Hospitality (Mullica Hill), which provides affordable and effective hotel management software; and First Responders Live (Voorhees), a phone app that aims to improve community-police relations by fostering positive interactions between the two via live feeds and other means.

Camden Catalyst not only enticed numerous startups to visit the city, but also potential investors. In addition, the event attracted hopeful community members who want to see Camden thrive. The success of Camden Catalyst is good news for the city. Startups from all over got a taste of Camden and a chance to see the potential for growth in the state of New Jersey.

In a future article, we will cover the final round of the competition announcing the startup that won the $25,000 prize.

Previous: Lambertville-based Startup RobustWealth is More Than Just Another Robo-Adviser
Next: Panelists Discuss What Makes a Technology an Innovation at Morris EDC Forum