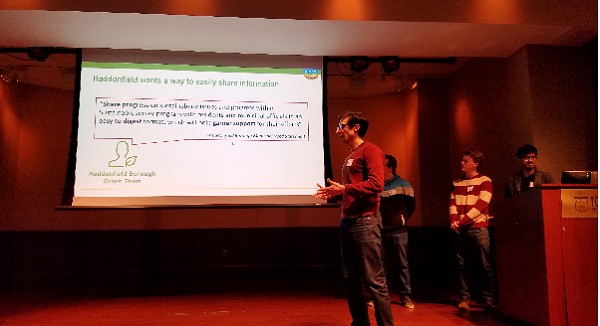 The winners were announced for the first ever Coding for Community competition, which was organized by Sustainable Jersey, a nonprofit organization that provides tools, training and financial incentives for communities pursuing environmental sustainability programs.  The organization had kicked off this statewide competition back in January at NJIT, in Newark. The final presentations were made and judged on March 31 at The College of New Jersey (Ewing).

AT&T provided $10,000 to Sustainable Jersey toward the prize money, the organization said in a press release. The winning team received $8,000, free coworking space at an unnamed premier facility and coaching sessions with a venture capitalist and digital marketer. Each team member will also be able to participate for free in the 10-week Newark Innovation Acceleration Program at NJIT.

The Coding for Community Challenge first place winner was Encore Dev Labs, for its project “Waste of Energy,” which addressed the chronic overheating problem in the South Orange and Maplewood School District. The team collected temperature data from classrooms and provided teachers with a way to report overheating through trigger alerts sent to school administrators, enabling them to take action. The Township of Maplewood will receive $2,000 for partnering with and supporting the winning team.

The second place winner was Team Dashability, for the “Data Visualization Dashboard,” which allows green teams to share their progress in the Sustainable Jersey certification process through easy-to-understand visualizations, and to get their visualizations out to social media. Haddonfield Borough will receive $1,000 for partnering with and supporting this team.

Honorable Mention for Innovation – Troop 58 for “My Town Hall,” which gave Amazon Alexa the ability to answer common questions about municipalities, something that citizens could use.

Honorable Mention for Presentation – Hansen Unlimited for a street lamp detection program for the City of Perth Amboy, to help the city detect outages and improve public safety.

Honorable Mention for Data Usability – Bike View, which developed an app that maps and creates visualizations of current bike accident and crash data. It is currently being used by the Princeton Bicycle Advisory Committee and the Princeton Planning Department. The data will inform Princeton’s Master Plan; and Access Princeton, a department of the Princeton municipality, will integrate the crash data into the town’s 311 system.

The five judges for the Coding for Community competition were: Aaron Price, the founder and CEO of Propelify; Adam D. Loehner, the deputy village administrator of South Orange; Joel Natividad, the director of open data for OpenGov (Redwood City, Calif.); Marc Pfeiffer, principal at Pfeiffer Gov LLC (Bedminster); and Sara Appleton, a member of the Center for Urban Innovation at the New York City Economic Development Corporation.

Previous: New Jersey Employs More Than 200,000 People in Its Tech Sector
Next: Building a Secure Database for Patients' End-of-Life Plans