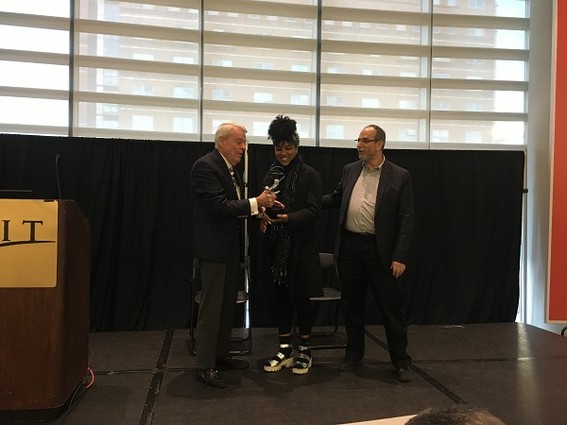 At the end of November, NJIT, Capital One and the Greater Newark Enterprises Corporation sponsored the Newark Innovation Acceleration Challenge, held at NJIT.

This competition, which has been running for nine years, features student innovators and members of the community who have potentially viable businesses; the two groups compete in separatetracks. The candidates’ applications were examined based on the business potential of their projects; then 10 students and 10 residents of the greater Newark area were selected to pitch to the judges and to an audience of interested onlookers.

The winners – students and community members alike – received a $3,000 stipend from Capital One to allow them to attend the NJIT Innovation Accelerator next summer, where they can get their businesses off the ground or figure out if they have a real shot at making their idea into a thriving enterprise.

The three winners of the student competition were Mark Quiles, for his League of Lifeguards; Bharath Babu Nunna, who pitched a micro biochip for cancer detection; and Michael Steadman, for his Ironbound Boxing & Education, a social venture.

Four winners were selected from the community track: Kayla Jackson, for PeduL; Frank Ozoria, for TOMO!; Chrystoff Camacho, for ParaTrees; and Julius Richards, for TAGEE.

This year, John P. Keegan, chairman and president of the Charles Edison Fund, also presented the “Tommy” awards to the first place winners. The awards are given for innovation in the tradition of Thomas A. Edison, who started his first business creating ticker tape machines in Newark, before he did his groundbreaking work, according to Michael A. Ehrlich, codirector of the New Jersey Innovation Acceleration Center, who emceed the event.

Aisha Glover, president and CEO of the Newark Community Economic Development Corporation (Newark CEDC), said that there is a clear momentum towards Newark’s comeback as a vibrant city, noting that she had just participated in talks with Mars about returning to the city. Glover’s background includes helping entrepreneurs in Brooklyn, New York; and she said, “I am here to make sure that what happened in Brooklyn doesn’t happen in Newark,” referring to the gentrification of Brooklyn that has forced so many residents out of the borough. “One way we do that is to invest in entrepreneurs and small businesses, as well as residents.”

Glover told the attendees that the City of Newark is rich with technical and business resources, and she urged entrepreneurs at the event to use these resources, which are often free. She also noted that Newark’s location, near transportation and New York, makes it a great place to live, and added that 11,000 new housing units are in the pipeline. “Being able to draw [talent] from the metropolitan area is extremely valuable,” she noted. And she said that the Newark CEDC runs an incubator specifically for up-and-coming retailers.

Speaking for Capital One, Theresa Bedeau said that she was happy to see the evolution of the Innovation Challenge over the last nine years. “Giving back to our communities is at the heart of what we do at Capital One,” she told the group. “Last year alone, our associates spent more than 400,000 hours of community service and the company gave more than $48 million in philanthropic investments to support nonprofit organizations and the work they do in the communities we serve.”

Keynote speaker Sybil Bost, Newark community liaison for Whole Foods Market, gave attendees insights on how they can get their food-related products into the Whole Foods system. “Whole Food Markets has a different perspective when it comes to innovation,” she said. “We want entrepreneurs to, one, be local, we want them to be innovative … we want you guys to be trendy, then we want you to be conscious.”

People who have products they want to get into Whole Foods Markets must do lots of research to make sure they have the right combination of ingredients and social conscience that matches the Whole Foods ethos, she said. The question is not only “will that product work in one of our Northeast stores, or would it work better on the West Coast?” It’s what the ingredients are. Are they healthy? Are they sustainably sourced?

Whole Foods also wants people who are conscious leaders, who employ the underserved, for example, and who are thoughtful about the environment and think about how the product or business affects the world, she said.

NJTechWeekly.com attended several of the pitches, and we will have an additional story on them later this week.