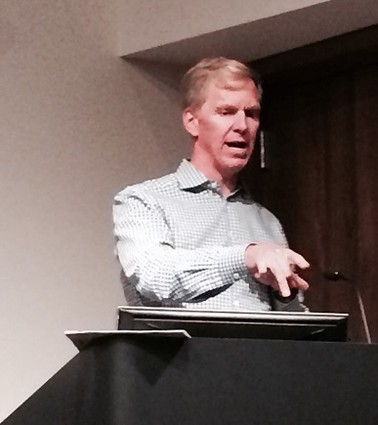 When Gordon Ritter tells someone to go “jump off a cliff,” he’s not trying to be mean or disrespectful.

Rather, that’s just the Silicon Valley venture capitalist’s way of telling people to take risks if they ever want to attain their goals.

“We should all jump off a cliff as often as possible,” said Ritter, the keynote speaker at the Keller Center’s 11th Annual Innovation Forum, on Feb. 24 at Princeton University’s Andlinger Center. “You are charting your own course when you take enough risks.”

As the founder and general partner of San Mateo, California-based Emergence Capital, Ritter has taken on plenty of risky investments over his 25 years in Silicon Valley’s tech community of powerful giants and hungry startups.

One tech bet that has paid off handsomely for Emergence Capital is Salesforce, a provider of cloud-based enterprise software. It was the venture capital firm’s first investment, made in 2003.

Ritter recalled that Salesforce CEO Marc Benioff had the idea of offering his company’s customer-relationship-management product on the cloud, and of introducing other novel business practices that “could have killed the company” if shunned by customers at that time.  Fortunately for both Emergence Capital and Salesforce, that was just the beginning of Salesforce’s ascent as a tech powerhouse.

Another one of Emergence Capital’s earlier investments, cloud-based software provider Veeva Systems, was also viewed as quite risky, in this case because the company focused on selling its technology to only one industry.  This marketing strategy was then practically unheard of among big technology companies, which typically sold their products to multiple industries.

Ritter said that Peter Gassner, Veeva’s founder and CEO, “has an absolute attraction to risk” that has inevitably turned this feisty startup into one worth billions of dollars today.

Risk-taking behavior is also highly valued at Emergence Capital itself. The firm’s employees are expected to sign up for an extreme personal goal each year. “It forces us out of our comfort zone and helps us cultivate that risk,” Ritter said.

As for Ritter, he had made good on his own “crazy” personal goal by recently completing a 250-mile, 10-day trail run through Switzerland’s mountainous terrain.

Ritter’s passion for taking risks could be traced back to his youth in Maine.  Back then, Ritter “always hated doing what everyone else was doing,” and took a different path toward reaching his goals.

Describing himself as a good student but “a complete nonathlete” while attending prep school, Ritter noted that he had joined the school’s rowing team to pick up a sport.  Soon, he became quite accomplished at rowing.

His rowing skills led to offers from both Harvard and Princeton universities to join their teams.  Sticking to his risk-taking philosophy, Ritter decided to attend Princeton because he wanted to join a team that could turn the school around as an underdog in a sport that its Ivy League rival had dominated.

His contrarian ways followed the Princeton economics graduate to Silicon Valley, where he opened his venture capital firm in the wake of the dot.com meltdown in the early 2000s.

Despite the carnage of failed tech companies around him, Ritter was undaunted. It was right time for Ritter to begin investing in technology while other investors shied away from this sector. Following his instincts, he took a gamble on the decimated industry. “If you don’t try, you won’t have the big wins.”

Ritter noted that companies with employees who have different backgrounds, temperaments and skills are more likely to move the business forward.  A more diversified pool of workers will avoid what Ritter labels as “a country club problem,” in which the desire to be with others who share similar traits ends up stifling a company’s growth and creativity.

As for the venture capital industry, Ritter admitted that this business should be doing more to bring more women and minorities into its ranks, and he criticized his own profession for not following its gospel of change when it comes to diversity.

“We have to be disrupted just like we expect disruption in our companies,” he said.

One of the worst possible things that can happen to a business, according to Ritter, is for its chief executive to make his or her own interests the top priority or to fail to share any of the credit for the company’s success.

“I choose to work with entrepreneurs who don’t put their own personal advancement ahead of the company,” he said.  “I also focus on the CEOs who don’t behave like they have created all of the value in the company.”

On the current business climate in Silicon Valley, Ritter acknowledged that life there is a bit tougher these days amid the tech stock swoon and the rapidly declining fortunes of the tech unicorns (i.e., private startups with valuations of $1 billion or more).

But Ritter has been there and done that, and he sees the latest downturn as a necessary correction in an industry  that  can get a little frothy at times. But he feels that, once the smoke clears, the companies left standing will be those that possess a big vision and strong leadership skills.

“When the cycle reverses, only the CEOs with true north will survive.”

Following Ritter’s remarks, the judges at the Innovation Forum awarded prize money totaling $30,000 to researchers working on projects that could potentially be used in commercial projects.

The first prize was awarded to Jen-Tang Lu and Jason W. Fleischer for their work on an enhanced ultra-imaging technique to improve the technology that is currently available.  “We are ready to revolutionize ultrasound images,” Lu told the audience during his pitch.

The other prizes were awarded to:

·       Jake Herb, Craig Arnold and Carl Nist-Lund for their research on low-cost green electrolytes for magnesium-ion batteries that can be used for automotive and other purposes.

·       Charles Gentile, Adam Cohen and George Ascione for their work on a non-uranium isotope that is frequently used for medical diagnostic imaging.

·       Gilad Arwartz and Marcus Hulmark for their research on a new sensing technology that is designed to improve conventional measuring techniques.