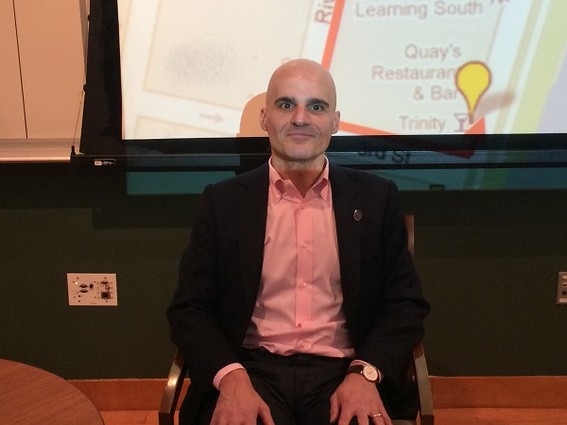 Serial entrepreneur and investor Mark Gerson has a simple rule that everyone should abide  by before starting a business. “Take your idea and tell the dumbest person you know about it.  If he doesn’t get it, it’s time to refine that idea.”

Gerson, who spoke to a sold-out crowd at the New Jersey Tech Meetup on Jan. 14, probably should have followed his own advice early in his career.

In the late ‘90s, Gerson and fellow Yale Law School grad Thomas D. Lehrman founded a publishing house to provide guidebooks on various industries for investors.  But customers weren’t exactly beating down the doors of the fledgling company, Gerson Lehrman Group (GLG), to buy the books.

“Nobody wanted to read them,” recalled Gerson. “I don’t remember how much we were charging for the books.  I do know how much they were paying for them.  Zero.”

That marked the beginning of a new business model for GLG, which has become a highly successful membership network for professional learning. Today, the New York-based company connects thousands of top professionals in various specialties to more than 1,400 client companies in 40 countries, and has more than 1,000 employees worldwide.

Gerson admits that he and his business partner didn’t initially “do a very good job of validating our idea.”

The biggest mistake they made at that time was failing to grasp the possibility that Americans “are too polite” when giving feedback to budding entrepreneurs. “Everyone said it was great, but no one had any intention of buying [the guides].”

Another one of Gerson’s businesses also revised its original concept.

In 2012, Gerson and former New York Giants running back Tiki Barber formed Thuzio, which books professional athletes and other celebrities for corporate events.

Gerson, whose brother introduced him to Barber, said that Thuzio was created as a welcome departure from the usual types of entertainment offered to corporate clients, who are typically treated to “steak dinners, golf outings and ball games.”

Two years later, Thuzio is gaining wider acceptance and recognition for its idea, and has added a new facet to its business model:  club memberships for its corporate customers, allowing them or their guests to rub elbows with professional athletes at dinners and other activities. With over 300 members in New York and four other cities, Thuzio offers membership packages ranging from several thousands to tens of thousands of dollars.

Gerson seems to have the knack for turning ideas into profitable ventures. But he has learned over the years that would-be entrepreneurs, no matter how talented, can’t hold a steady full-time job while trying to build a successful business.

“It’s time to drop what you are doing and pursue your dream.”

Previous: Technology Marketing in the Digital Age: Social Treasure, How To Assess and Organize Your Social Media Assets
Next: Picture of Fragmented NJ Startup Scene Emerges from LaunchNJ, Publitics Survey

1687 More posts in News category
Recommended for you

At EdgeCon, the annual conference of NJ Edge (Newark), a nonprofit organization that addresses the...