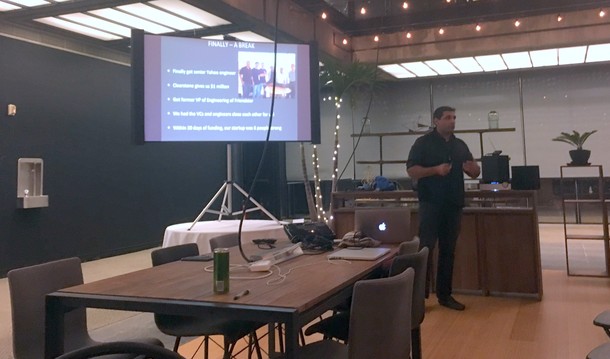 Investor Jay Bhatti, a New Jersey native and Rutgers grad, came to the NJ Strategic Design + Tech meetup at Vi Coworking Hub, at Bell Works (Holmdel), on January 6 with some advice for entrepreneurs based on his own experience as an entrepreneur and investor.

Currently the CTO of BrandProject (New York), Bhatti was one of the founders of Spock.com, a “people search engine” that has experienced a meteoric rise.

He cofounded Spock.com after a successful career at Microsoft. Bhatti recalled that he got all of his medical checkups and sold everything he owned before leaving Microsoft, so he could be fully committed to the startup.

However, Spock.com had a rocky start, as investors couldn’t figure out the value of it, and VCs who had expressed an interest were nowhere to be found when it was time to commit.

The company finally got a break when Clearstone Venture Partners (Santa Monica, Calif.) gave it $1 million and the founders were able to put together a high-powered team. They were also able to develop a great advisory board.

After they built the product, the founders received a lot of positive press and “it was a lot of fun” right before the site launched, he recalled. But the day it launched, the site crashed. “The reason it happened is that we had such buzz built up before the launch,” and people, especially in Europe, were worried about their privacy. Everyone went on the site.

After the site recovered from that misstep, competitors began to emerge. Also, the press turned against Spock.com. And then, the startup made a mistake.

The technology, which was completely machine-based, couldn’t work optimally because it relied on data from only one source, the Web. Two people in the U.K. had the same name and were born on the same day, but one was a criminal and the other a reporter. “We thought they were the same person,” Bhatti said.

Answering a question from the audience, Bhatti noted that to resolve this issue, the startup had to check the names derived from Web data against other data sources, such as criminal data bases and civic records.

Bhatti noted that one lesson he had learned as an entrepreneur was that, rather than continue adding features to a product, you should go deeper and perfect the product you already have. A VC told him that “adding more features won’t increase business,” but focusing on the product he already had and making it better would.

What made Spock.com successful was that it began powering the people search engines at social media sites like Friendster, Hi-5 and Tagged.

Bhatti warned that the VC–entrepreneur relationship can take a beating when the entrepreneur wants to keep running the company, but the VCs want to exit because they need the revenue to start a new fund or for some other reason. “You have to have wide-open eyes, and know what the good and bad things are that can happen when you take money.” Even so, the entrepreneurs were able to sell the company in a down economy in May 2009. At that time, the technology was generating over 50 million monthly searches.

Bhatti shared the following lessons learned from his Spock.com experience.

You want to think big. Spock.com was able to get VCs excited because the founders had a big vision for the company.

You want to be committed. “I don’t trust the commitment level of a lot of startups. I meet a lot of founders now who are working at a big company and say, ‘I’ll quit when the startup takes off.’ You are never going to reach the level you need to be at with your startup if you are spending eight hours every day working on something else.

Focus is also key. Too many founders lose focus on the core components of their companies. Stick to your core values and keep the product and company vision simple.

Speed is important. The faster you can execute, the better. As soon as you launch, you’ll see competitors “coming out the door.” So keep things happening at the company, and remember that momentum is a powerful ally.

Make sure you have profits: That’s the only thing that lets you live to fight another day.

Guard your reputation: Make sure that nothing tarnishes it. Credibility is a brand.

Get a great team: Great partners, investors and employees add up to a great startup, and can make all the difference.

Previous: Interview: Jack Killion Discusses His New Book “Network All the Time, Everywhere with Everybody”
Next: Why Rutgers professors dislike system that tracks their work