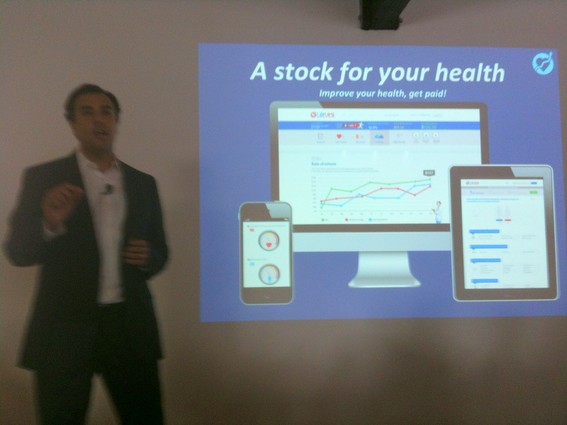 Four companies that are alumni of the Tigerlabs accelerator in Princeton presented at the Tigerlabs Showcase Sept. 17, 2013. Bert Navarrete, Tigerlabs founder, rightly noted that it is instructive to see how some of the companies have evolved by working alongside customers.

Two of the four startups have remained laser-focused on their original concepts and have made significant progress in advancing their businesses. The other two have pivoted in amazing ways, applying their underlying technology to new problems.

Up first was The Dentboard CEO and founder Caleb Bastian, a licensed dentist earning a Ph.D. in applied mathematics at Princeton. The Dentboard’s product seems similar to the way it started out, but with significant improvements.

Bastian said The Dentboard solves a problem for dentists, who will need to have an electronic health record (EHR) system in place next year. In addition, no single system had offered the EHR and managed the general office until now, he asserted.

Bastian gave a demo of the product, showing the flow the dental office staff will take through the process as well as the ease- of-use features that make sure that records do not get lost in the system. For comparison’s sake, he also showed a competitor’s product, which had a complicated screen and 30 buttons. Dentboard is offering its product on a software as a service (SaaS) basis. “We are totally focused on the dentist’s bottom line. We don’t do anything unless it will have a measurable effect on revenue and reduce cost,” he said.

Presenting for Eko (Hong Kong and New York), an enterprise-level mobile platform designed for the Asian market, was CEO Korowad Chearavanont. This product—created by graduates of the Lawrenceville School (Lawrenceville)—has changed tremendously since its first Demo Day, at which Eko presented a rudimentary group-messaging application. And it has drawn investors and advisers.

“Our company is currently focused on the Asia-Pacific region,” said Chearavanont. The reason? Eko believes that market is more ready for the product. In Asia, he said, mobile messaging applications have already acquired hundreds of millions of users and brought in revenue, most of which comes from the sale of emoji (the ideograms and smileys used in Japanese electronic messages and Web pages) and sticker packets. “This illustrates to us that the Asia-Pacific region is rapidly adopting mobile messaging as their primary form of messaging,” said Chearavanont.

In Asia, this trend has extended to the enterprise, with both company officials and employees abandoning official forms of corporate communication like email, Chearavanont said. However, corporate users are turning to insecure consumer applications not built for the enterprise. The enterprise applications currently available lack core features that modern mobile messaging apps currently have, he said, and have poor user interfaces.

Chearavanont said Eko had completed its private solution and released a private beta version on August 24, 2013, to True Corporation. True is a telecommunications firm in Southeast Asia that is using the product internally. The application is secure, he added. Chearavanont was able to show live screen shots of True executives using the application. The company has also designed stickers and emojispecifically for the enterprise customer, which Chearavanont said is “something that our customer really, really likes and that no other competitor has.”

Epy.io has pivoted during the past year, veering away from an application that can be used to standardize scientific modeling and toward a widget that can model and visualize health epidemics in populations. The company presented at the Tigerlabs Healthcare IT Demo Day as Plom.io, which is now a nonprofit research organization, founder Tiffany Bogich told NJTechWeekly.com in an email. And it has moved from Princeton to New York.

“N.J. gave us access to the academic resources at Princeton University as well as the nonprofit and for-profit segments of health, with mentors familiar with the large pharmaceutical companies in the area as well as local foundations with a national impact in health (Robert Wood Johnson Foundation),” Bogich wrote. However, New York provides the company access to the public health officials and open data movement there.

Epy.io is to public health what Bloomberg is to financial institutions, Bogich said. When it comes to diseases like the flu and how they spread, public health officials can now determine what happened in the past, but they don’t have the data to tell them what’s coming. In an age of limited budgets, they need to know what they should do about health problems now.

Epy.io makes science actionable through a widget-like tool called the Epy, Bogich said. It can be embedded on a public health agency’s site for internal or external use, to help the agency make decisions.

Bogich used the example of HIV in San Francisco, in which an Epy will provide a graphical representation of the number of new cases of the virus predicted for the following year. Health departments can decide how many health centers they will need based on the data. The graphs are connected to a library of scientific data and a powerful decision-support tool. “You don’t need to have a modeling background to be able to interact with this tool,” she said.

Said Bogich, “The business model for Epy is a business-subscription model, and it is priced at $2,000 per disease. We are first targeting the nearly 3,000 public health agencies in the United States. We are focusing on four major health issues: flu, HIV, diabetes, as well as childhood infections.”

The company is now in the Mozilla WebFWD program, Bogich added, and is in the process of building Epies. “Right now we are working with the New York City Health Department to build Epies for their problems,” she said.

In the least enviable spot—the end of the presentations roster—was LifeVest, a company set up to provide businesses smarter health incentives for their employees. NJTechWeekly.com saw this startup at the last Tigerlabs Healthcare Demo. LifeVest’s vision is to help businesses improve the health of their workforce and save money, CEO Jon Cooper said, adding, “We do this via a stock tied to health.”

Healthcare costs are a big problem for companies, Cooper noted. “If a Fortune 500 company leaves this problem unaddressed, that’s $500 million of shareholder value destroyed,” he said.

In the 16 months since starting LifeVest, the founders have launched the product, found their first customers, tested the product rigorously and won recognition as an important innovative health company, Cooper asserted. The firm is now expanding its team.

In his presentation, Cooper distinguished LifeVest from traditional wellness plans. One flavor of wellness programs is participation-based: users sign up, participate and get paid whether or not they have made changes to improve their health. Outcome-based programs reward individuals for hitting thresholds, like getting their body mass index to 25. “These programs essentially reward people who are already healthy,” noted Cooper. The people who need to improve their health the most and who therefore drive the costs see the targets as almost unattainable, so they withdraw from the program, he said.

“We focus on four key areas: behavioral economics, science, a SaaS-based platform and a business model that aligns our incentives to a company’s needs,” said Cooper. The company measures metrics that matter, such as cholesterol and blood pressure. “Behavioral economics isn’t a buzzword. We find those nagging human tendencies that really drive people to do silly things and use them to drive people to focus on tracking and improving their health, for maximum impact,” he said.

For human resource departments, said Cooper, “We connect the incentives directly to the employees and automate the process. We handle promotion, communications, enrollment, data analysis and incentives so they don’t have to.”

In an email, Cooper told NJTechWeekly.com that LifeVest is splitting its time between Pennsylvania and Princeton.