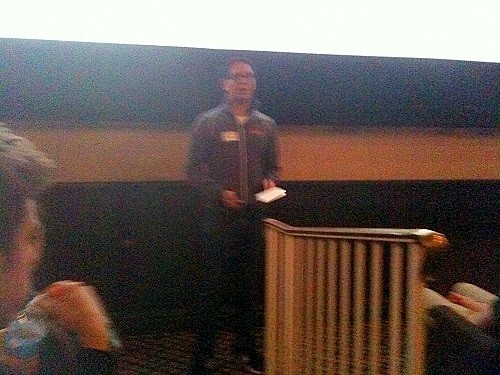 The showcase featured Tigerlabs entrepreneurs from its summer program, recent grads and alumni who returned to demonstrate how their companies had progressed.

This story covers the new companies; a second one will discuss the alumni companies who also presented.

First to the stage was CEO Dan Scanlon of Present (Princeton) pitching a mobile live-video app that lets users demand what they want to view anywhere, as it is happening. The app lets you follow the people and things that you want to see, and Present gives you a social feed of live videos shared by them. “You can tune in to music and events being shared by people in audiences, or you can see what your friends are up to right now,” Scanlon noted.

Currently, finding what you want to see is a matter of getting lucky, he stated. “We plan to change that with a feature called Demand … You can search cities that you’ve never been to and see what is going on around them right now,” Scanlon said. Users can also search hashtags like #skydiving. Present will soon be soft-launching in the Apple App Store.

Next to speak was Alex Klokus, CEO of Wisdom.ly (New York), which lets users create and host virtual events cost-effectively. Klokus, a New York University grad, said there are more than 300,000 missed opportunities a year when people want to attend events but are unable to do so due to time constraints, geographic location or economic limitations. Many event organizers want to add a virtual component to complement or replace their physical events, he said.

The market is large: virtual events are expected to compose half of all events by 2015, Klokus said, but are very expensive to create using current offerings. Wisdom.ly has automated event creation and offers many other features including data analytics. The product works for live streaming small events like meetups and large ones that use many rooms. Wisdom.ly took part in Start-Up Chile before attending Tigerlabs and is in the beta testing stage.

FitSense (Princeton) is a mobile app that provides meaningful health analytics and recommendations based on data from existing qualified devices. According to Vitalii Kushnirenko, the app can use information collected in real time and proprietary analytics to make recommendations that will change fitness status. For example, the device can tell users if they need more recovery time after a run than they are accustomed to taking. The FitSense team developed its own core algorithm to collect the data from fitness sensors. The application is already available on Google Play. “Our next step is to grow our user base and develop our infrastructure,” Kushnirenko said.

A B2B application, etrackr (Princeton) provides cloud-based business automation tools for small online retailers who have shipping logistics challenges and have largely been ignored. The company hopes to tap into the huge number of online retailers for whom current solutions are too expensive.

Etrackr expects its first customers to be companies raising money on current crowdfunding portals such as Kickstarter and who must offer fulfillment of some goods in exchange for a donation on these sites. Speaking for etrackr, Ani Channarasappa said it is difficult for small online retailers to measure and manage inventory… One of their hardest tasks is providing great customer service and user engagement. Etrackr provides customer service, inventory management and order fulfillment automation to clients.

Fitsby (Chicago) is a mobile wellness app that “gamifies” the gym experience, motivating users through rewards and fitness buddy groups. The company has just partnered with Aetna to be on its Carepass platform. Presenting for Fitsby, Dan Gaeta said he had started the company a year and a half ago because he saw how difficult it was to stick to a fitness plan. He said current apps don’t work well and result in user churn. “Of the 156 million people who download fitness apps, only seven percent … continue to use them,” he said.

Fitsby connects users to fitness groups to give them a more meaningful, personalized experience, Gaeta said. Users can connect their current friends and family to the app, or the algorithms can match them with likeminded individuals. Fitsby also lets users track their gym check-ins, walking, running and cycling. “Essentially what we have is a fitness town square. Instead of creating just another fitness app … what we have is a fitness culture where users come onto our application, they grow from the experience and they keep coming back to it,” Gaeta said.

A local marketplace for freelancers and employers, Jokket (Washington, D.C.) is built on a proprietary learning algorithm. The object is to cultivate trust on the platform. Ben Moriarty, who presented for Jokket, said that like other marketplaces, it lets you hire people and bid on and manage jobs. However, Jokket addresses the changing workforce, made up of independent contractors.

The current competition asks you to hire effectively without knowing enough about the people you are hiring, Moriarty said. “When they do collect the data, they process it in a way that doesn’t mean anything.” With Jokket, he said, when a job is completed, the employer is mandated to rate the freelancer. Likewise, the freelancer rates the employer. Jokket’s algorithm will get to the truth in the middle, Moriarty said. The company will be heading back to the D.C. area after completing Tigerlabs to launch, Moriarity told us in an email. “The first stage of our rollout is in DC, MD, and VA and we want to be as close as possible leading up to, and following, our launch in the coming weeks.”