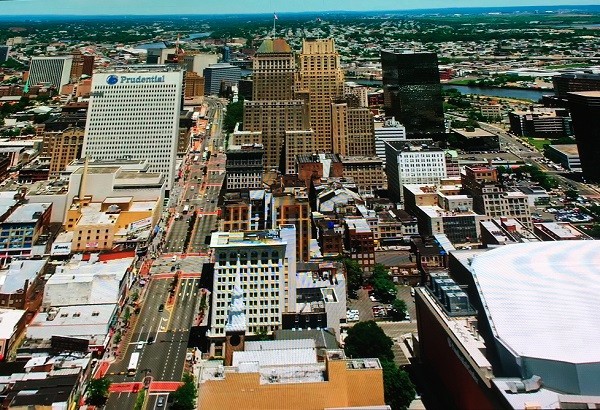 This view of Newark was part of an NVP Labs presentation. | Courtesy of NVP Labs

Newark reaches another milestone to becoming an important technology hub as it prepares for the Amazon-backed VOICE Summit later this month.

The three-day national conference focused on artificial-intelligence driven voice technology will be held on July 24 – July 26 at NJIT, is projected to draw over 1,500 techies.

Modev, the organizer of the summit, announced Newark as the VOICE Summit host city in April over New York City, Philadelphia, and Los Angeles.

“Everybody realizes this is a completely different audience for Newark. This is a Silicon-Valley tech audience that never thought of Newark as a tech destination,” said Karin Aaron, president and CEO of the Greater Newark Convention and Visitors Bureau in an article from BrickCityLive. “The goal is to show them that it is. We have the conference and tech capabilities to host a conference like this.”

The conference can potentially transform Newark’s image and cement the city as a technology greenhouse. Previously, many people said it was like pulling teeth to attract developers and business into the city and now Newark boasts over $2 billion of investment in construction.

Revival cuts like a double-edge sword as some residents worry that, “it’s not for us,” fear gentrification with displacement and ponder — innovation at whose expense?

“I think the mayor has a good grasp of where the heart of the city is and what is necessary to move forward that in a way that isn’t exclusive, that doesn’t preclude people that have been living here for a decade or five decades,” said Newark’s former Chief Information Officer, Seth Wainer in a conversation with Reginald Calixte on a CalixTech News podcast in February.

Efforts have been made to ensure that Newark residents are benefiting from the technology boom. Newark Fiber is a public-private partnership that offers 10 gigabit-per-second high speed internet to the city, one of the fastest urban data networks. In May, residents of Georgia King Village housing community received free WiFi courtesy of Newark Fiber.

“For a lot of folks, access to the internet means access to employment,” said Mekaelia Davis, director of corporate giving for Prudential to NJ.com. “It’s not only going to bridge the digital divide, we’re saving people $80-$100 a month. That’s more money for groceries, more money for daycare.”

The city also announced LinkNWK, a multi-partner collaboration for Newark to install 45 high-tech “sidewalk kiosks” in each of the city’s five wards. The kiosks will provide free wifi to anyone within range and ports to charge mobile devices at no cost to taxpayers. The only other cities to use this technology are New York City, London, and Philadelphia.

“LinkNWK is only possible in Newark because of our incredible dark fiber and technology assets,” Mayor Ras Baraka said. “What you’re seeing is another example of how residents benefit from the city’s tech infrastructure and accelerating growth as a technology hub.”

In addition to attracting new people and new business, Wainer thinks about how the city’s growing tech sphere can be better at creating opportunities to cultivate homegrown talent. He wants to encourage entrepreneurs to stay in the city and for startups to get involved, like Jhamar Youngblood, CEO of Blastchat and Newark native who won $50,000 from the city for safety feature that lets women send notifications if they’re in danger.

“When I wake up in the morning, I [think about] what I can do in Newark today that is going to improve and innovate on where we were yesterday. What is technology’s role in growth?” Wainer said.

“We want to be very democratic about it all and not just focus on the downtown. We want to be delivering big wins to create a more just world.This is not a game of making people who take the train into Newark and then leave feel better, it’s truly about how we can improve the city for the city.”