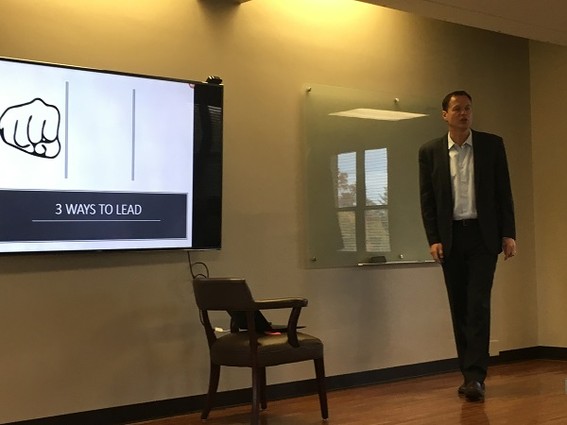 Simon Nynens, chairman and CEO of Wayside Technology Group (Eatontown), has some news for leaders: Employees who feel cared for and have their needs met tend to be more productive and meet or exceed sales goals. You don’t have to treat employees like children to get the best out of them.

Nynens made his remarks at a November NJ Tech Council meeting that took place at Russel Hall, the renovated Ft. Monmouth building that houses Vi Hub Coworking and TetherView.

There are only three ways to lead, Nynens told the attendees. The first and most primitive is: “Do what I say or I’ll smack you.” This also includes mental manipulation, when people believe that if they don’t do what the leader says they will be fired, demoted or ridiculed.

The second type of management is using money to motivate. “You are a coin-operated machine. … If I just pay you, you do what I say.” The third, and the one Nynens believes in, is motivation. “Why don’t you just really focus on what people like to do and to enable them to do what they want to do?” he asked. Nynens doesn’t deny that money is important, but other factors are important as well. People want good wages, but after that, they want appreciation for work done and respect for them as individuals.

“In our company, we have a banner over the door that says, ‘Did today really matter?’ We want that day to matter. We are all dead in 100 years. … I don’t understand why anyone would lock themselves up in a room for eight hours with people they don’t like,” at a job they don’t like.

At Wayside, Nynens has encouraged people who don’t like their jobs to let him know, and he’ll find them another job that will suit them better at another company. One person took advantage of that, and he found her a job where she was really happy. She was so happy with the experience that her new company became a customer of Wayside.

Nynens recommends that companies survey their employees to find out what will make them happy. For example, Wayside’s management used to go over the company’s financials with employees once a year because they thought transparency would help employee morale. Through a survey, they found out that the employees didn’t care.

So, instead, Wayside instituted scavenger hunts with prizes of up to two days off. The employees had to do things like take a photo of themselves sitting in the back of a police cruiser. They loved it.

“Our employees want to go to Atlantic City once a year. I’m not particularly fond of gambling or Atlantic city, but it’s not about you as a leader. It’s about your employees, it’s about your team. Find out what tickles them.”

Wayside also allows folks to work from home. “Middle management likes to do Ass on Chair time,” he said, calling that practice nonsense. He told a story about an employee who came in a half hour late, angering the manager. “So I talked to the lady and asked why she was late. She told me that, first of all, she deals with West Coast customers, and they don’t get in until 11 a.m., but she is forced to come in 9 to 5. And she had to drop off her child at kindergarten, and ‘you know, sometimes I’m late.’” Nynens said.

“I realized this is insane. I’m not selling a penny more software or hardware” by making her adhere to these rules. Nynens told her she could work at home if she wanted to, drop off the kids, do whatever she needed to do, as long as the work got done.

At the office, Wayside got rid of the permanent desks. “We did surveys. Some people like quiet, so half of our office is curtained off with carpet and there are signs on the door that say ‘be quiet.’” Others like collaboration, so there are collaborative rooms, he said. “We have treadmill desks, we have bike desks. I built a Starbucks kind of café that you can sit in and work, because some people like to work in those. We have an outside area where you can sit. We have a meditation room.”

The point is that Wayside is focusing on the things that really matter, and that’s selling software, Nynens said.

To do that, the company looked into what made its employees happy. Everyone thinks money is the answer. “Don’t kid yourself. Not 100 percent of the rich people are happy. … But I can tell you one thing: If you don’t have money to buy food and shelter for your family, you are going to be unhappy.”

They also need time, time to do what they want to do.

The third thing they need is to be healthy.

Wayside focusses on the intersection of these three needs. “I told our employees, ‘I wish I could pay everybody $1 million a year, but it’s not possible. What I can give you is time and I can give you health.’” Wayside eliminated plastic from its building. The company provides free fruit to snack on during the day. People can work from home and make their own hours.

He added that people have sent him photos from the beach, thanking him for making that possible. He only asks that sales are good, and that people are doing their jobs in their own time.

“So, I would ask that all of you figure out for your teams what would make them a little happier,” he concluded. And remember that life is short. “Every now and then, just realize how lucky we are to be alive,” and don’t take it for granted.

Previous: What I Learned as an Intern at Bond Andiola & Company, a Tech-Enabled Accounting Firm
Next: 5 Mistakes Tech Entrepreneurs Make That Cost Them Equity

NJ Governor Requests Expertise of 6 People Who Still Know COBOL https://buff.ly/2V2I3TS Sign up here if you can help https://buff.ly/2WAATZB We've already had more than 6 people respond once http://njtechweekly.com put the word out.