Home » News » “We Are in a Battle between Rightness and Greatness,” Cherry Says at Scarlet Startups 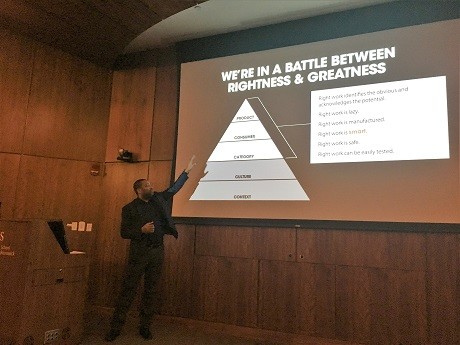 Daniel Cherry III came to the Scarlet Startups meetup at Rutgers Business School – Newark to talk about creativity in business. Cherry is the chief marketing and innovation officer for the Prudential Center and the New Jersey Devils.

He started out his January 26 presentation by praising Newark as New Jersey’s “best kept secret,” and he said that his goal was to make sure that “this community is no longer a ‘best kept secret.’”

Calling himself a Brooklyn kid, Cherry said that “you’d never know how amazing this place is looking from the outside in.” But he added that his  role at “the Rock” and with the Devils offers an exciting opportunity to communicate the best about Newark and New Jersey.

Turning to marketing, Cherry said that he’s been on both “sides of the brief,” coming up with creative solutions to business problems or formulating and communicating the problems to be addressed. He peppered his remarks with examples from his work experience.

“We are in a battle between rightness and greatness,” Cherry told the group. He explained that people like to be graded on an A-to-F scale, and they get A’s for being “right.” So when it comes to  creativity, a lot of the brands that we love are stuck. New ideas don’t often make sense to the guys in charge, the guys who think the “right” way. “They don’t love that crazy idea because it’s crazy. They go on the ‘right’ path.

“The right path is easy to evaluate and easy to test, easy to measure.” But greatness is the accelerant of culture and change. “Most folks who create great ideas[ are those who ]have nothing to lose,” and that’s why great ideas are so hard to find in corporate culture, where people have so much to lose.

Cherry did point out that many great ideas have tested poorly, including Apple retail, which lost money during its first few years of operation. But he noted that Apple eventually became one of the most profitable retailers by square foot in the U.S.

Speaking to the entrepreneurs in the audience, Cherry observed that the most educated people are the least likely to become entrepreneurs. They recognize the risk and don’t take it. They are very smart, but people with great ideas can’t stop trying despite the risks.

A lot of companies get outflanked because they continue to think in the “right” way, he said. That’s where startups have an edge.

Cherry advised the group to always use research based on observation as well as data when trying  to figure out what works and what doesn’t. And always do a gut check, he said. Your gut will tell you something about culture and context and how well your idea will be received in the marketplace.

With regard to marketing, Cherry said that,  rather than use the typical 4 Ps (price, product, promotion and place), entrepreneurs should use the three R’s: revenue, responsibility and recruitment. “We want everything we do to be revenue-driven,” he said. “I urge people not to use the term ‘budget’ ever again. Budgets have been a boon and a curse to many a company. …Use the term ‘investment’ instead.”

A budget is an allotment of money that you spend to do something good for the company, he noted, but a lot of times you can’t guarantee that a dollar spent will generate two dollars in return. Also, when Q4 comes around, you are told use it or lose it. “What kind of business process planning is that?” he asked.

Responsibility is a part of the equation, too. Companies have to be responsible to their employees and their communities, and companies that adhere to this belief are  more sustainable over the long haul, he said. Cherry urged companies to be good and do good, and to build a culture of responsibility.

As far as recruiting goes, Cherry said that many companies value loyalty above all else. “I posit to you that those companies that care about that do not grow as fast as those that do not.” Later in his presentation, he urged companies to go for a set percentage of workforce turnover, to get new blood into an organization and foster creativity.

He also told the group not to be too dependent on creating loyal customers. Customer loyalty can change on a dime, he said. For example, if a grandfather and son are loyal Devils fans, but the grandson loves the Rangers, that family’s loyalty can change. The better strategy is to create three or four new fans who will want those tickets if the loyal fans drop out. In other words, create demand.

However, creating demand is tricky. It’s not just about advertising. “If you ever have a meeting with a creative agency, ask how they create demand,” Cherry advised. Chances are if they are a digital agency, they’ll push digital. If they specialize in TV ads, they’ll push that, he noted.

Finally, Cherry urged the students in the audience who were marketing majors to learn everything they could about creating demand and creating preference, as it would make them more marketable.